Side effect concerns and their impact on women’s uptake of modern family planning methods in rural Ghana: a mixed methods study

The discussion regarding women’s reproductive rights is currently a hot topic in Western countries, due to what is going on in the United States of America. However, to put the focus on another part of the world, a few researchers have decided to conduct a study on family planning in the Amansie West District of Ghana. The researchers conducted a study regarding family planning and the use of hormonal contraceptive methods. In their quest of finding the answers to their research questions, they decided to approach this study using mixed methods.

While conducting their research there were 281 surveys and 33 in-depth interviews with women from the age of 18-49 years old from the month of May to July 2018. The researchers explained that they utilised surveys to understand the use and future trends of use regarding contraceptives (Akosah et al, 2020). When it comes to the in-depth interviews, they wanted to research the context concerning the uptake and ongoing use of contraceptives.

In their findings, they found that women in Ghana are familiar with modern contraceptive methods, however, some women have stopped using contraceptives due to the fear of experiencing side effects. To give an example 17 participants in this study discontinued their use of contraceptives – but only 5 had actually experienced side effects. The researchers found that the Ghanian women’s fear of contraceptives was triggered by the change in menstruation patterns (Akosah et al, 2020).  This is due to their belief that menstruation is important in order to cleanse their bodies (Akosah et al, 2020). As a result, the researchers suggest that there is a need to fix these misconceptions about contraceptive methods in this region of Ghana.

The article discussed has used a mixed methods approach in order to understand the use of contraceptives in the Amansie West District of Ghana. Additionally, they have shown that some women in Ghana stopped using contraceptives due to the fear of side effects – which is a feeling that is not uncommon among my friends and I here in Europe. Accessibility to contraceptives has been an issue that is often discussed when it comes to reproductive rights. However, fear is perhaps something to be considered as well. 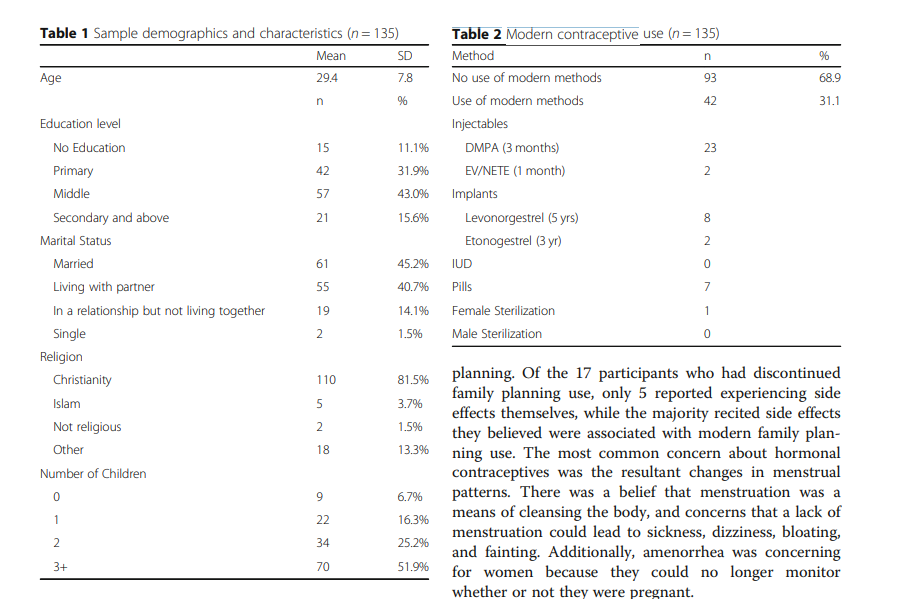