HIV Stigmatization and Masculinity: a mixed method research into stigmatization of those living with HIV in Moshi, Tanzania

In sub-Saharan Africa, research on HIV is not just limited to studying preventative care or understanding how to treat those living with HIV. Research also aims to understand the social context in which a person living with HIV may endure. By understanding the social and cultural contexts researchers can further understand stigmas that surround HIV that may create social ‘barriers’ that could hinder the accessibility to HIV care and prevention.

In Moshi, Tanzania, a city at the foot of Mount Kilimanjaro, a common stigma among men who are not living with HIV is the belief that HIV contraction is a ‘punishment for bad behaviour.’ These ‘barriers’ do not just affect those who are living with HIV but also may discourage HIV testing or stop people from seeking help. In Moshi, men assume roles of leadership. Blame and shame can ripple through communities and affect relationships for those living with HIV, therefore the opinions of the men are important. To further examine these barriers and how to potentially confront the stigmas from within the community, a group of global health researchers attempted to understand what exactly the stigmatization meant, what factors may cause stigmatization and how common they may be.

The medical research group consisted of a doctor, a clinician, a medical student, a psychologist, a professor of nursing, a pediatrician, and a population health scientist. The research and analysis that was conducted was of a mixed method that has both quantitative and qualitative measurements. Quantitative research is instrument based (i.e., census, surveys, questionnaires) and involves statistical analysis. It can provide a large database that helps to find trends and inequalities in population statistics. However, it can be limited as it can miss the social context of the people involved and can be impersonal. Qualitative research can help to fill this void as it gives participants a chance to voice themselves and can give insights that may be overlooked in statistical research. Qualitative research may build the social context that could be overlooked in quantitative analysis.

The Collection of Data and Results: Quantitative

Research was conducted among 480 men who were accompanying their pregnant partners for their first antenatal check-ups. The reason for locating the men in the clinic was because the clinic runs a program that assists with ‘stigma-based’ counselling that helps women and men. The men were compensated with 2000 shillings or the equivalent of one dollar. The participants were surveyed anonymously using tablets where they could both listen and read the questions and responses. By using tablets, the participants’ anonymity was further protected as it allowed them to do the surveys alone, in privacy. In this first quantitative survey, the participants ‘attitudes’ towards those living with HIV was measured. A scale was used that is known as the HIV Stigmas Attitude Scale (HSAS). The participants answered ‘yes’ or ‘no’ or ‘some level’ to the statements that are seen below. The results shown are of the percentages of those who answered ‘Yes’ to the statements. 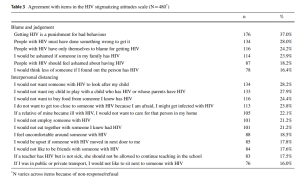 A second quantitative analysis determines the ages, educational backgrounds, marital status, jobs, history of testing HIV, and previous or current contact with those living with HIV. By correlating the personal factors of the participants to the HIV Stigma Attitude Scale the researchers determined that the most common factors of individuals who showed high levels of stigmatization towards persons living with HIV were young, did not have high levels of education, were Muslim, did not know anyone living with HIV or/and had low social support (meaning community connections and support). As seen below. 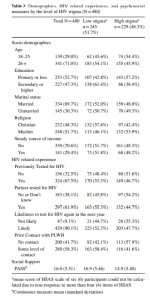 But what threat did people living with HIV really pose to these men? This is where the importance of qualitative analysis plays a part.

The Collection of Data and Results: Quantitative

Qualitative analysis helped to show a selected group of 16 men’s thoughts on persons living with HIV. The group was randomly chosen but also selected so as that half the group had a high stigma rating and the other half a low stigma rating. The results of the interviews showed that what the men found most threatening was the potential loss of a masculine identity and role in society.

If you have a family meeting, if this person begins to speak and he says something that is a big point, still the other will regard the point as meaningless.

Further aware of the stigmas the men also expressed the fear of losing their ‘dreams’ in life if they were to be contracted with HIV.

This would have meant that my dreams would be smashed because I wouldn’t have been able to perform my work properly.

The idea of losing one’s place in society also meant that some of the men with a high level of stigma deemed those living with HIV as untrustworthy because they were seen as having the capacity to contaminate others.

I think that it is the evil in that is in the human heart…people like that, when they know that they are infected with HIV, they might deceive your child and sleep with her or him just to infect your child.

These qualitative insights give the researchers a more in-depth understanding of the anxiety some of the men may feel towards those living with HIV as a personal fear of a loss of their male status in society as well as their prospects.

The researchers concluded that the most important result was that counselling was needed for men not just contracted with HIV but also those who do not have HIV. Open community discussions and contact with those who have HIV were concluded to be essential to de-stigmatizing HIV in Moshi, Tanzania.