Did you know that Madagascar was ranked 108 of 117 countries with the lowest food security worldwide? Or that over 80% of the Malagasy population relies on subsistence farming for income?

As the world experiences the increasing impact of climate change, it is precisely those smallholder farmers in Africa, who arguably suffer the most. The reliance on rainfed agriculture to produce a sufficient amount of food to establish food security proves less and less possible every year. Logically, someone might expect that unpredictable rainfall and droughts might push farmers to move into irrigation practices, but for some reason, this is not very common in Madagascar. In addition, deforestation is very widespread in order to clear fields to grow rice. Saskia Dröge et. al.(2022) set out to discover why this is the case and to address multiple issues of rice cultivation from ecological, agricultural, social, and economic perspectives.

In this blog post, I would like to present this research, and in particular its fascinating methodological approach. The outcome of the research was published in the Journal of Human Ecology in form of a 21-page long article, which presents a detailed description of the problem, chosen methodology, and findings. In order to understand why so many Malagasy farmers continue with rainfed agricultural practices, Dröge et. al.(2022) focused on assessing the productivity of both rice cultivation systems as well as on the perceptions of farmers themselves about the causes of lower yields.

To gain a comprehensive understanding of the issue, they chose to divide their research into two parts, combining quantitative and qualitative methods. In the first part, a 9-month household survey was conducted. This survey helped to uncover the socio-economic characteristics of as many as 499 households. After that, they carried out interviews with 171 heads of households by native Malagasy speakers from the research team. The stratified sample of interviewed households was based on the data obtained by the survey, such as household size, and the size and age of the plots used by the households. The interview questions were divided into socio-economic and agricultural parts, demonstrating the interdisciplinary approach of the research. The interviews allowed researchers not only to gain a deeper perspective on agricultural practices among Malagasy but also allowed for discovering how the farmers themselves define concepts such as food security and productivity.

Findings were processed, analyzed, and organized in a quantitative manner, using statistics and a generalized linear model (GLM) with Poisson distribution to determine variables associated with the food security of households. The research team presented their main findings in the article in form of tables and charts, pinpointing the most relevant discoveries.

By combining qualitative and quantitative data, and focusing on both - the objective calculated productivity and other numerical data, with the farmers' perception of their practices and yields - Dröge et. al. were able to paint a more complex and complete picture of the reality to make sense of the constraints on rice cultivation and food security in Madagascar. The team found that rainfed cultivation is very common due to its adaptability to cultivate slopes and that irrigation practices coincided with higher income households, who could afford irrigable land. For this reason, the authors concluded that assisting with irrigation infrastructure may increase food security, but only benefit households with access to irrigable land, which might already be better off and more food secure. Other households could then benefit from other interventions on, for example, animal husbandry and disease prevention. Therefore, improved agricultural practices on already existing swidden agricultural fields might act as a safety net for smallholders, diversifying agricultural practice and buffering unpredictable rainfall due to climatic changes. 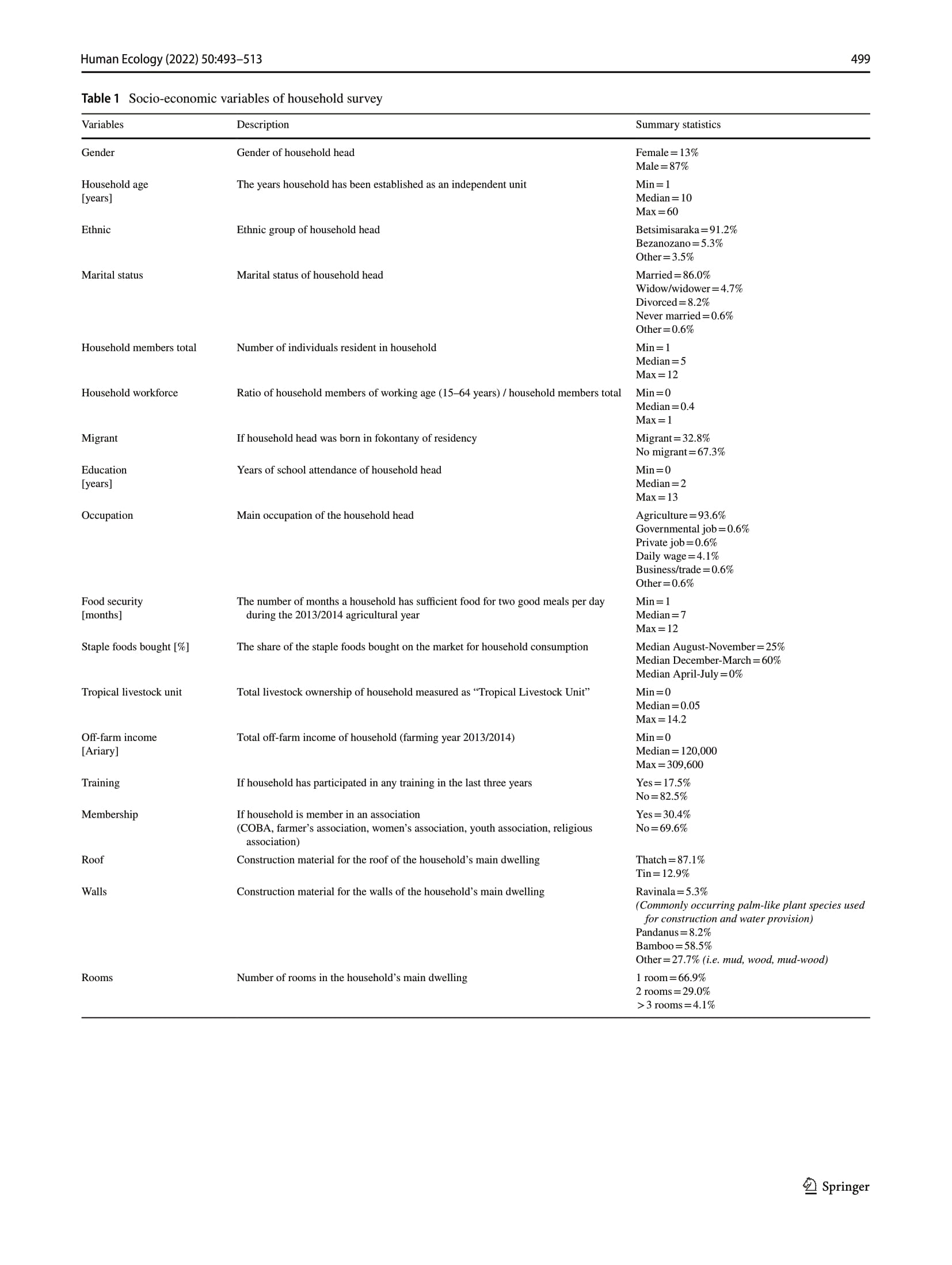 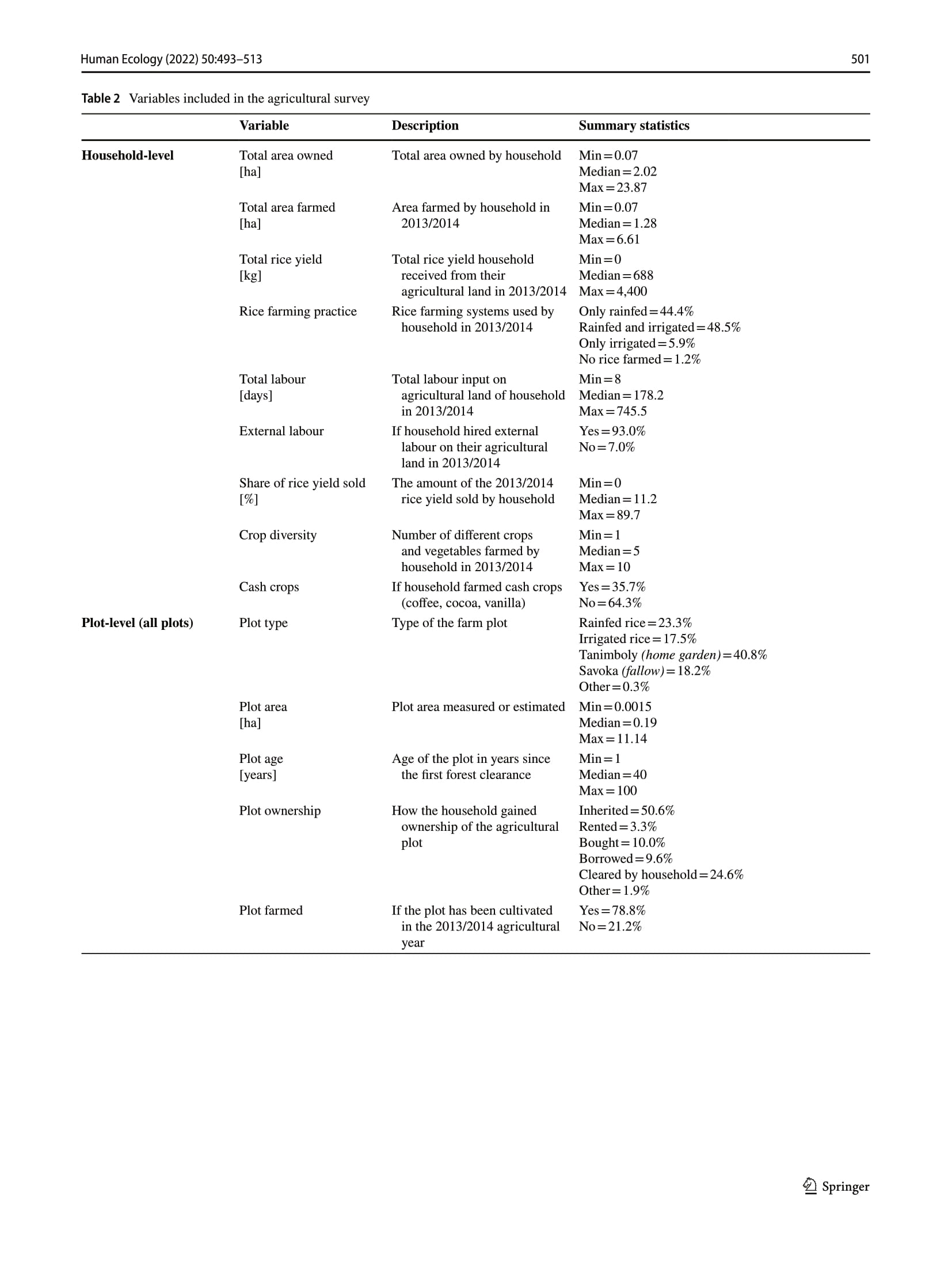 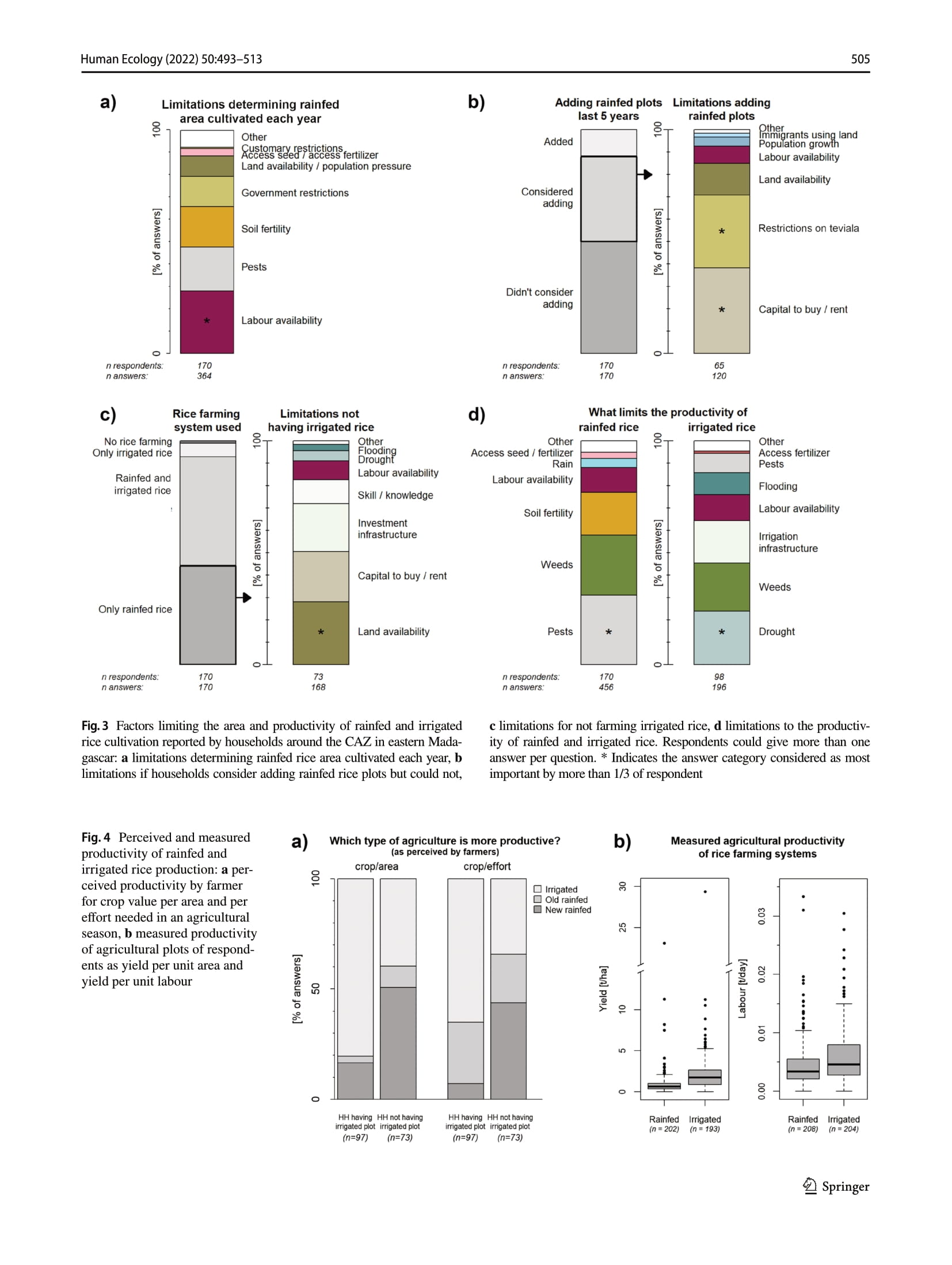