An Interdisciplinary Approach to the Sustainable Management of Territorial Resources in Hodh el Chargui, Mauritania 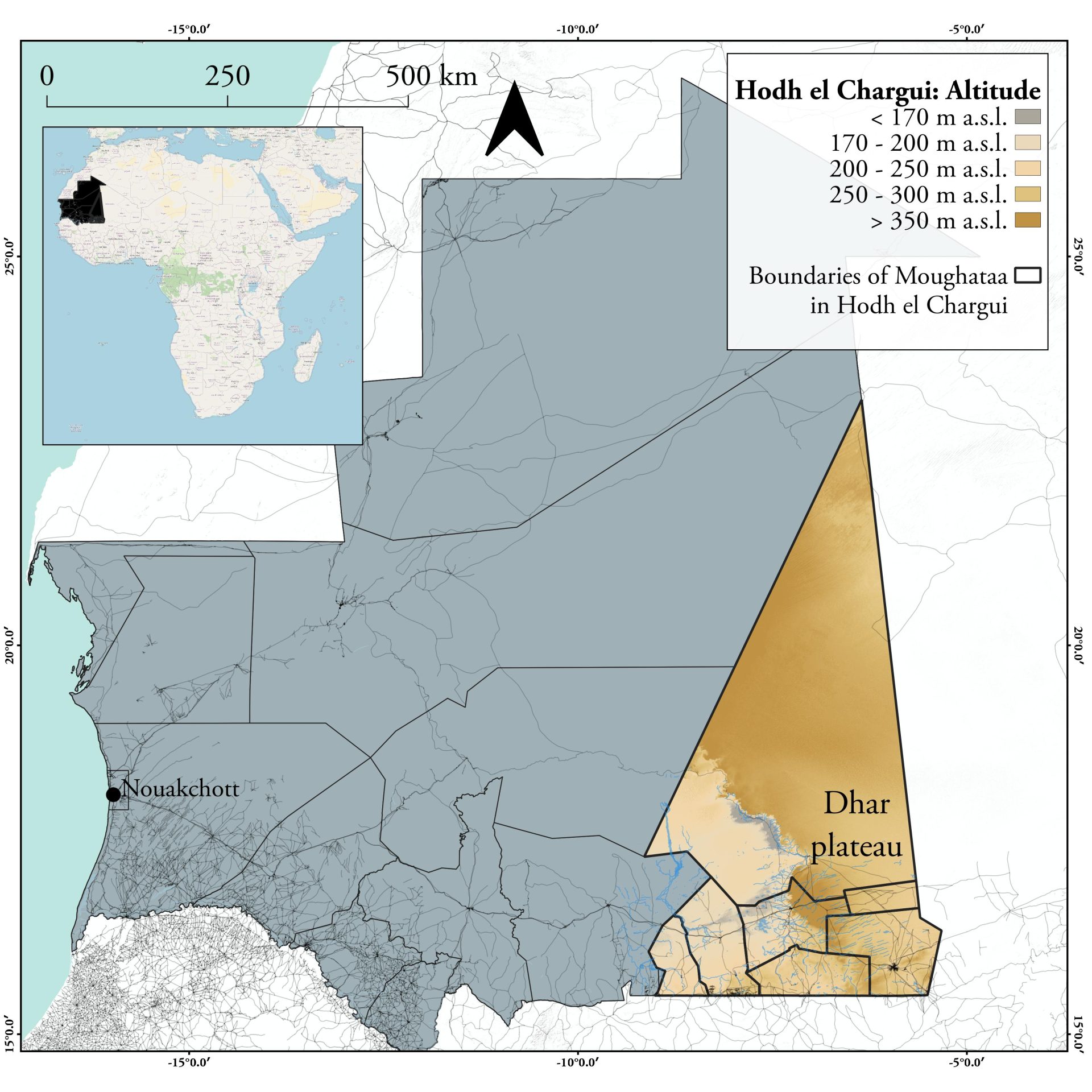 Mauritania is an arid country. Unlike neighboring Senegal, for example, at least three quarters of the West African country is desert or semidesert. And due to the expansion of the Sahara, this part is increasing. In the very southeast of the country lies the Hodh Ech Chargui region (al-Ḥauḍ aš-šarqī), which translates as eastern basin and takes its name from the Aoukar Depression, which in pre-Christian times was a food and life-giving lake. This lake has long since dried up. Hodh Ech Chargui is now one of the driest places in Mauritania. What’s more, the region is more than 800 km away from the capital Nouakchott at its closest point, and the only paved road, the Route de l’Espoir, ends in the regional capital Néma. The distance from Néma to the northernmost foothills of Hodh Ech Chargui, however, is roughly equivalent to that from Amsterdam to Munich and is entirely unpaved.

According to a census conducted in 2013, 430,000 people live in Hodh Ech Chargui, divided into seven moughataa (Muqāṭaʿa, province), which are in turn divided into 31 municipalities. Life for the sedentary and nomadic inhabitants of Hodh Ech Chargui is determined by the long dry season (October to June) and short rainy season (July to September), the latter of which varies greatly-there can be droughts as well as floods. Overall, Mauritanians face strong naturally induced risk here: Droughts, water scarcity, poverty of natural vegetation. These pressures are further complicated by the lack of infrastructure (water, health care, education, transportation) provided by the distant central government in Nouakchott. 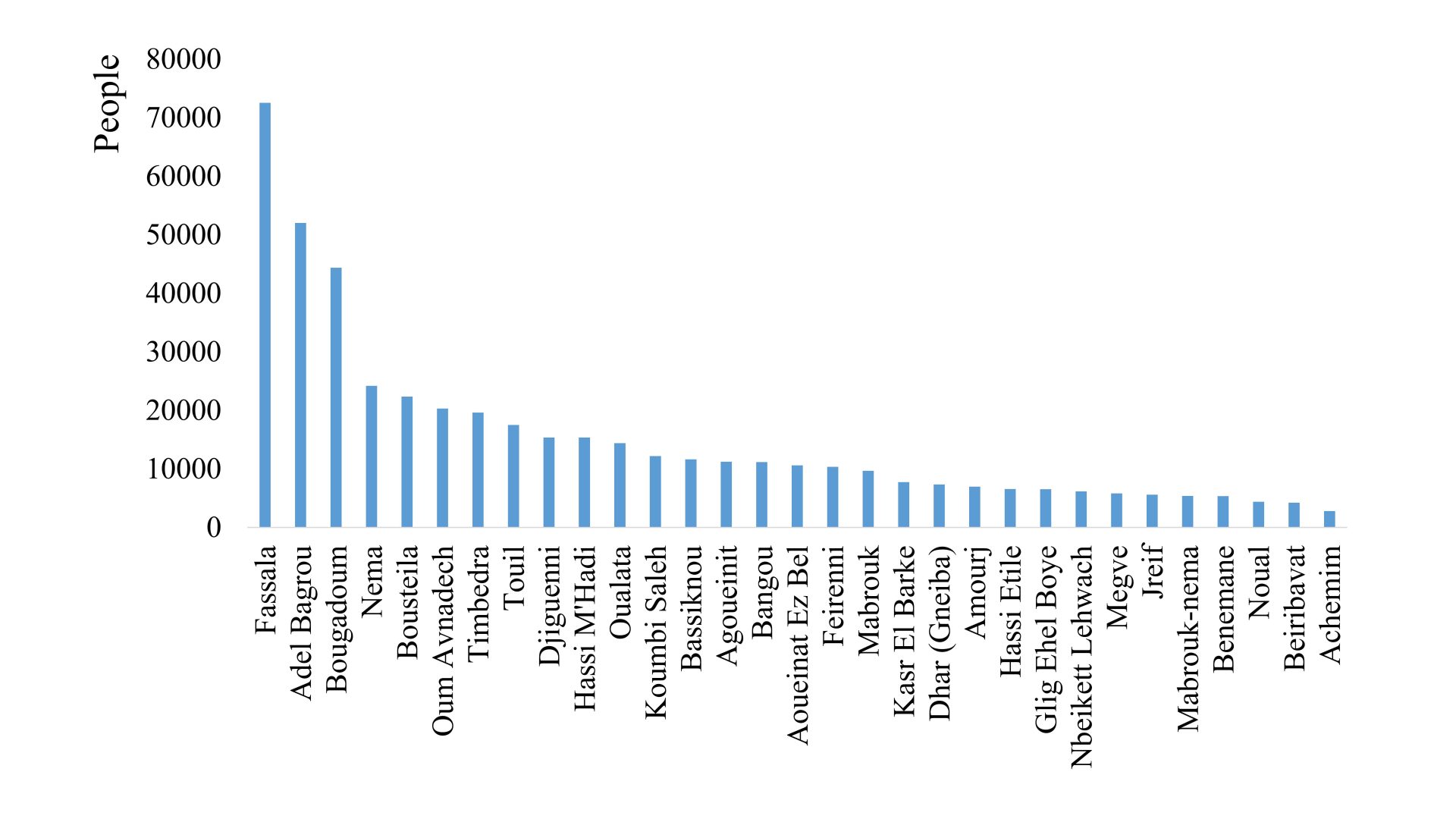 In doing so, the study has an interdisciplinary structure and fulfills qualitative and quantitative characteristics. On the one hand, on-site surveys were conducted in the Hodh Ech Chargui region with the aim of collecting more accurate data on the number of people living in the region, as well as information on gender, literacy rate, housing situation, access to water, energy, medical care, education, transportation and telecommunication facilities, and main economic employment. In addition, the on-site research focused on natural living conditions: there were questionnaires on the duration of the rainy season, perceptions of climate change over the past 20 years, and the condition of soil, vegetal resources, and water (surface and groundwater). The scope of the study is reflected in the fact that this questionnaire was distributed in all 31 municipalities and, in addition, in all semi-nomadic communities with more than 300 inhabitants. In addition, there was a questionnaire to study the wells in the region. Such a comprehensive approach is unprecedented in the region but was not the first data collection effort. In addition to this quantitative survey, the data were compared with other previous questionnaires and studies. Another approach involved a technically complicated analysis of Landsat satellite imagery United States Geological Survey (USGS) and digital elevation models of the Hodh Ech Chargui region with three objectives:

It is important to note that the study presented here sees itself as only a first step. The results of the data collection will eventually be exploited within the framework of the EU project RIMRAP, in order to enable the inhabitants in the long term to recognize naturally caused crises such as water shortages at an early stage in the future and to be able to deal with them better. In addition, the results will be made available to the public in the form of a dynamic webmap via the website geositlab.unito.it/rimrap, so that NGOs, for example, can also work with them. 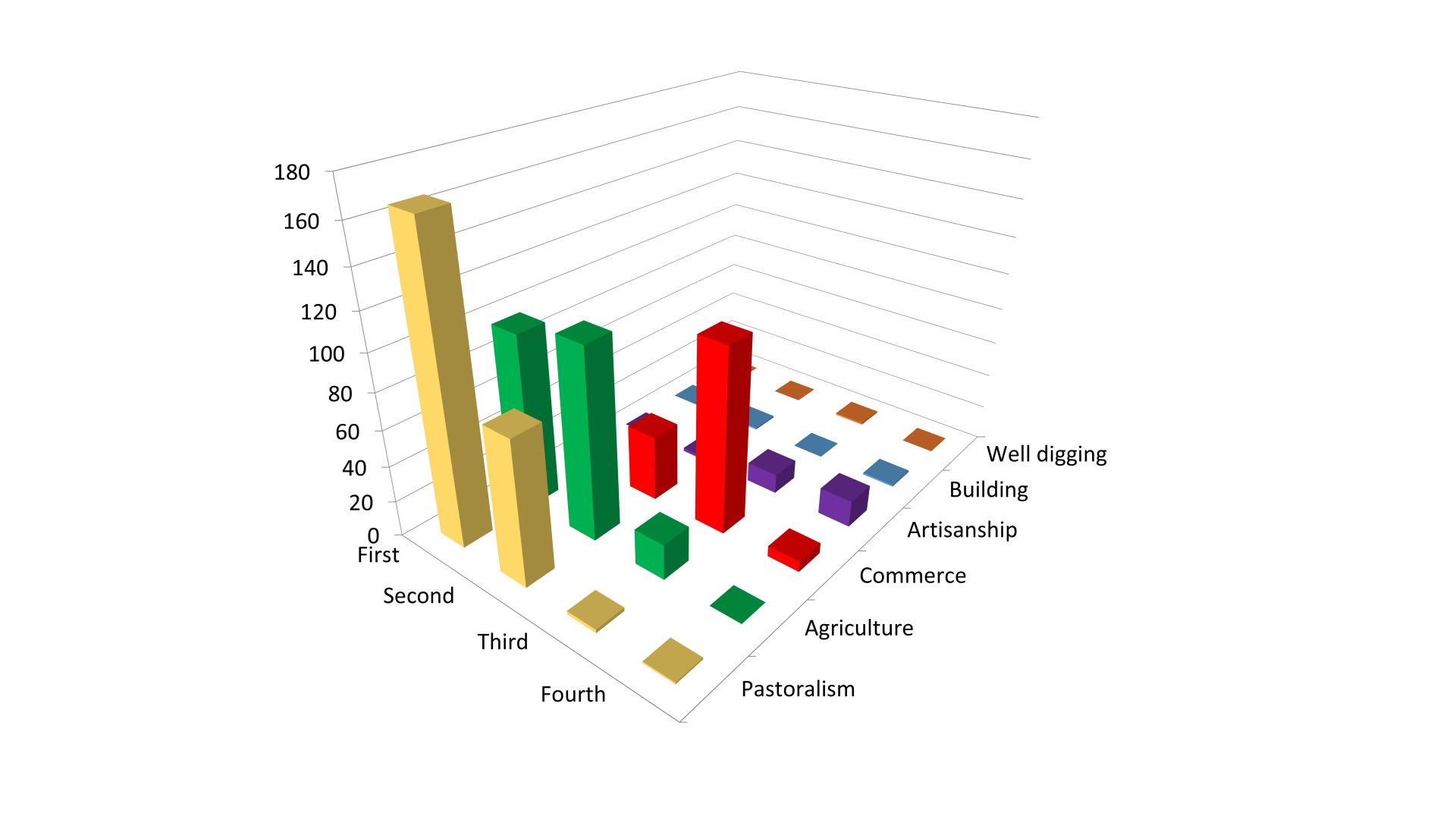 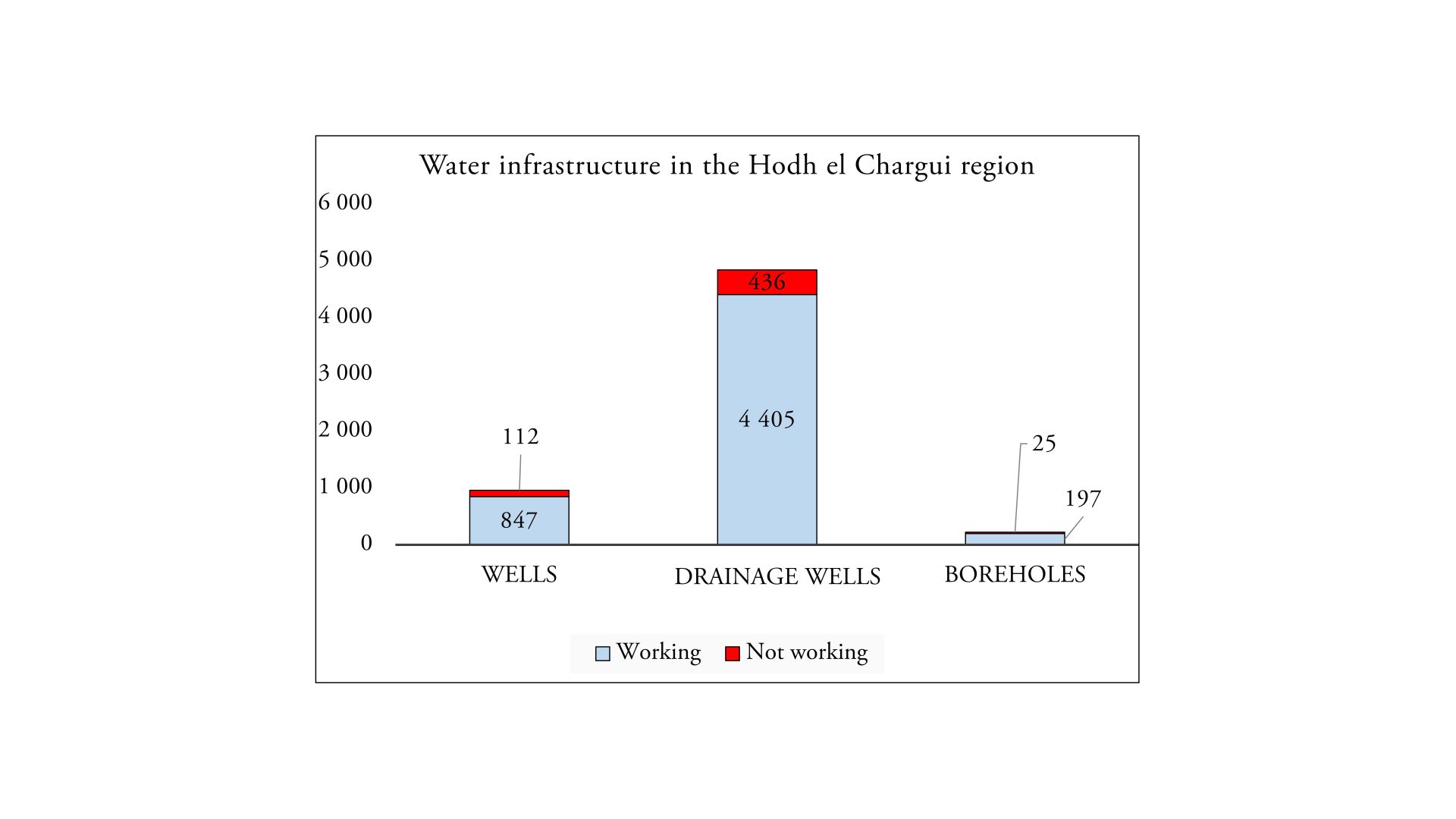 But what are the results of the study?

First, the map on the top shows the division of the region into its seven provinces and the location of the municipalities and rural or agro-pastoral communities with at least 300 inhabitants. Furthermore, the map shows mountain ranges and – of great importance – water wells, lakes and rivers. The table shows how the inhabitants of Hodh Ech Chargui are distributed among the municipalities. It is interesting to note that there is a different result in the population census than in 2013: In 2020, there are almost 470,000 people living in the region, which is an increase of 40,000 people. Among them, 47% are men and 53% are women. The map below right shows that population densities are much higher in the south of the region, with concentrations in the southwest and on the Malian border near Fassala. Very few people live in the northern province of Oualata, which is predominantly characterized by bare sand dunes. As for the literacy rate, it is generally assumed to be 25 %, including 30 % men and 20 % women. The highest literacy rates (Nema and Djiguenni) are 42% and 38%, respectively. The province has the lowest literacy rate at Fassala. The degree of availability of toilets in the communities is given by the study as 60%.

As far as water availability and infrastructure are concerned, the study comes to clear conclusions. Surface water has only an “ephemeral character,” which is why groundwater is the main water resource in the entire region. Therefore, wells have an essential function for both humans and animals. The study distinguishes between three types of water (wells, drainage wells, boreholes), of which drainage wells have by far the highest occurrence, as shown in the graphic above right. A distinction is also made between functioning and non-functioning wells, with the number of non-functioning wells ranging from 10 to 15 %, depending on the well type. Another illustration shows that the infrastructure for the management of surface water, i.e. dams, is mostly in very poor condition. As for Health infrastructure, for the whole region it is found that there is none in 57% of the communities, hospitals are available only in 35% (9a). For a medical emergency requiring transport to the hospital, most communities still resort to handcarts (60), with cars available for this purpose in only about 35 (9b). In terms of education, the study found that while 94% of communities have a school or educational institution, only 17% overall are in good condition (24% average, 48% poor). Since the survey also asked about the principal economic activity, it becomes clear how strongly the population also depends on an adequate water supply for its occupation. The graphic above left shows that most communities consider pastoralism as their main economic activity, followed by agriculture. For both, reliable water use is mandatory. That the rainy and dry seasons have a significant impact on living conditions is evident in Figure 15. Most communities describe shrub savannah (51%) as part of their environment, 29% indicated grove, 18% unvegetated territory, and 2% forest. Shrub savannah, however, which is important for pastoralism, cannot be used for pastoralism during extended dry periods because it becomes too dry. 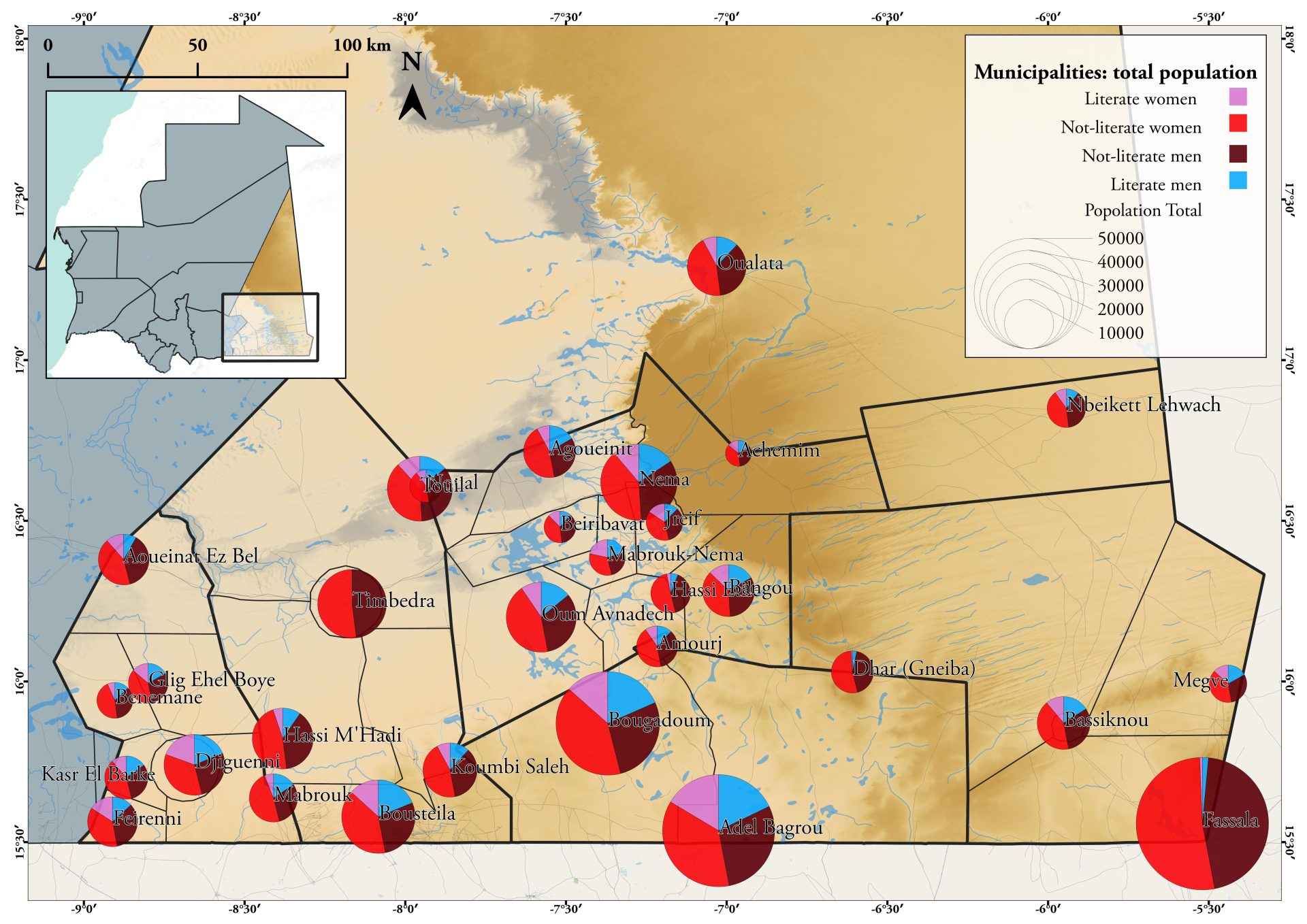 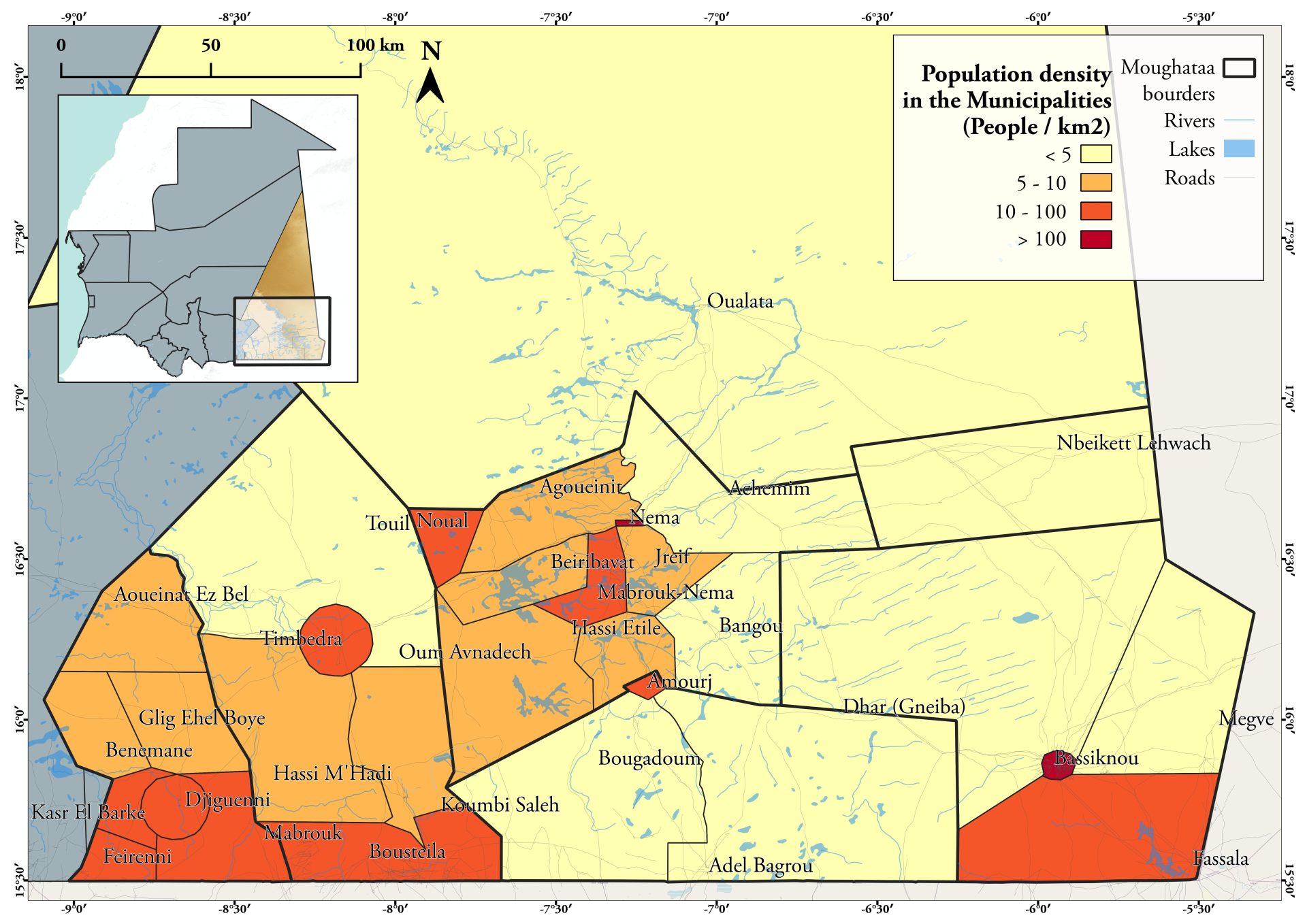 Climate change is leading to longer dry seasons, a decline in water and the expansion of the Sahara. In this context, it is interesting to see to what extent the inhabitants of Hodh Ech Chargui themselves perceive the climatic change of the last 10 years. Perceptions show that the absolute majority of people now rate the rainy season as shorter (92%), the dry season as longer (96%), and temperatures as higher (96%). In addition, people generally see an increase in droughts (88%), drought damage (83%), and storms (83%), while floods are still rated by 37% as less frequent than in the past (Table 4). In the qualitative analysis of the maps provides, it becomes clear to what extent the region is dependent on seasonality in its availability of surface water. There are clear differences between wet and dry seasons.

The systematic approach of the study, which incorporates qualitative and quantitative research methods, has brought to light extensive results on the situation of the inhabitants and their living conditions in the Hodh Ech Chargui region and has shown not only how much the inhabitants depend on the local water resources, but also what impact climate change is already having there. It is therefore to be welcomed that the data obtained can be further exploited and countermeasures can be developed to ensure that life in Hodh Ech Chargui can continue. Furthermore, it could be shown how necessary it is to find a scientific approach that combines different fields of research.