Come join me for a meal at the African Kitchen 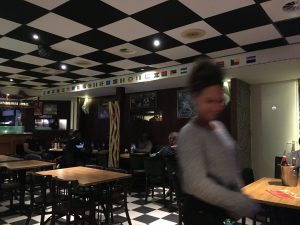 Picture taken of the African kitchen.

For this assignment we chose to explore a lovely restaurant called the African Kitchen in Gein, Amsterdam.
Subjectivity
With the assignment being ethnography I was trying to take in my environment and describe my findings as objective as I could. However whilst doing my research it was getting more and more clear that total subjectivity would be very hard to get. I realized that I was looking at this restaurant with a biast view. As an observer I was inclined to place my findings within a frame of my own memories , associations and  recognition of notions that I knew.  Or If not then at least comparing them with what I knew. While I was trying to be objective I realized that I was comparing my findings to how I viewed the world around me in the Netherlands and what I had seen with my own family. Half of my heritage is African but I was born and raised here in the Netherlands.

My role as researcher of course is to deliver an unbiased observation which I strived to do. How would I look at this place, these people, the food  and the mannerisms if this would not been familiar to me? If I had not known or seen it before? I tried to be as objective as possible in my role of researcher.

My Observations
– What I saw was black people a lot of black people , African people. This being an noticeable point as in my whole world even though I am black myself I am always surrounded by a majority of white people, especially at the university.

– The clothes of the customers where very colorful. Those of the women where mostly made with traditional African fabric.

– There where African wooden carvings on the wall and the walls where filled with African flags , resembling to me the feeling of pan africanism.

– The orders where taken at the waitresses pace and after a long time a huge amount of food appeared.

– When drinks where ordered it was just by raising your drink and signaling the waitress that you would like another one.

– In the beginning there where a couple of men a separate tables watching football and shouting ,with a very deep and to my ears typically African voice, tot the tv.

– Mannerisms that I observed where, the spontaneous joining of other peoples tables. A guy would walk up to a table start chatting and join the group, sometimes just talking and sometimes offering a beer.  This also happend with me and my friend. A man came up to us started chatting and asked us where we were from and bought us a beer.

– What I also noticed that there were far more men drinking at the tables, and even though it was a restaurant it looked and was treated more like a local pub. With different groups of mostly men, gathered at different tables to drink. Of the eight groups of visitors only two where female groups.

– The music that was being played started with being quite soulful and gospel-like and ended with being almost club like afrobeats. Loud upbeat music.

– What I felt whilst observing and also of course being a participant was a welcoming open feeling where everybody was allowed to partake in and made a part of the group. A feeling of coming together

Data. The data I collected where pictures , one of which you can view above this story. The rest of my data I wrote down whilst observing and eating my meal.