Michael Soi calls himself a social commentator that uses paintings as a medium of communication.

The Nairobi-based Kenyan painter claims to be documenting the important yet hidden aspects of life in Nairobi. His witty personality shines through his satirical cartoonist painting approach, which follows a traditional Kenyan style that grew during independence as a way of mocking the establishment. His collection China loves Africa depicts 100 paintings, painted between 2015 and 2021 rendering his commentary on relations between China and Africa. In the last decades, China has been growing relations with Africa through foreign direct investments. This has generated debates as some view the phenomenon as an alternative means of investment for African countries that are without structural conditions. While others view events as a new form of colonialism where Africa will be left in debt and under the power of China. Through his collection, Soi shares a rather skeptical view of Sino-African relations. He expresses his view through the paintings which he documents and shares digitally through his Instagram, Twitter, and Facebook page but also through digital documentation of art galleries. In doing so, he aims to reach as many people as possible. From Soi’s collection of paintings on the subject, we identified four key themes: father & god, resource, elites, and seduction.

The theme of Father/God includes many paintings in which there is a representation of Xi Jinping, whose portrayal is visibly the center of the pieces. This is done by making all the other characters look toward him and by making him larger or placing him above the other characters. Soi juxtaposes different head accessories with different symbolisms, depending on the painting and message. In one of the pieces, Jinping is wearing a white baseball hat while distributing what appears to be Chinese tea into different African countries’ cups. This can be interpreted as a covert spread of communist ideology. In another painting, Jinping wears a red beret, symbolizing military power, while distributing candy to children. The act of giving out lollipops (88), stuffed pandas (95), or tea might signify the expansion of the Chinese market to Africa, where both elites and ordinary people stretch their hands to receive it. Through these juxtapositions, Soi produces a narrative that China’s involvements in Africa are not what they seem to be. 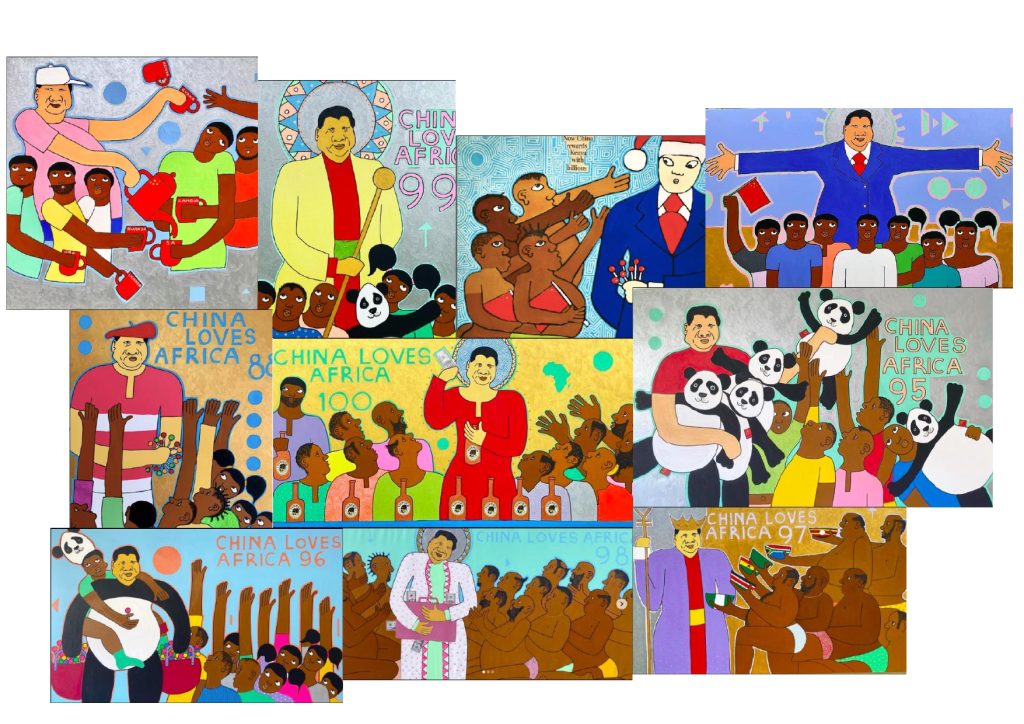 In later paintings, especially from 97 to 100 Xi Jinping is clearly depicted as a king -with a crown- or as a holy figure – with a halo or with an open arms stance. In the 97th painting, Jinping is holding a staff with a Chinese Yuan symbol and in the 100th painting, he is holding money, implying that his power over Africa is purely economic. Soi is using these slight exaggerations to critically comment on the narrative of China as a savior for Africa.  Additionally, in paintings 97 and 98, the people begging Xi Jinping are elites in underpants, which is meant to ridicule them and show that they are also under Chinese influence.

The next theme, which we named Resources, includes all paintings depicting the extraction or consumption of natural resources. In Michael Soi’s cartoonish style, Africa is represented by a woman, and China is either represented by a drawing of Xi Jinping or by Michael’s recurring character of a Chinese person. In many of his paintings, such as number 56, Soi’s Chinese character is being fed through an infusion of gold, oil, copper, and titanium – African raw resources. Similarly, many of his paintings depict the Chinese characters sucking resources or national beers – representing African nations- through tubes. The extraction of resources is also shown by the Chinese character sucking from the breast of a woman -Africa- or from a cow with continental African patterns. Additionally, in paintings such as 7 and 67, Soi depicts Chinese characters cutting off or holding onto elephant tusks which makes a direct reference to ivory poaching. These paintings render a rather negative narrative of China taking resources from Africa, and sucking it dry. 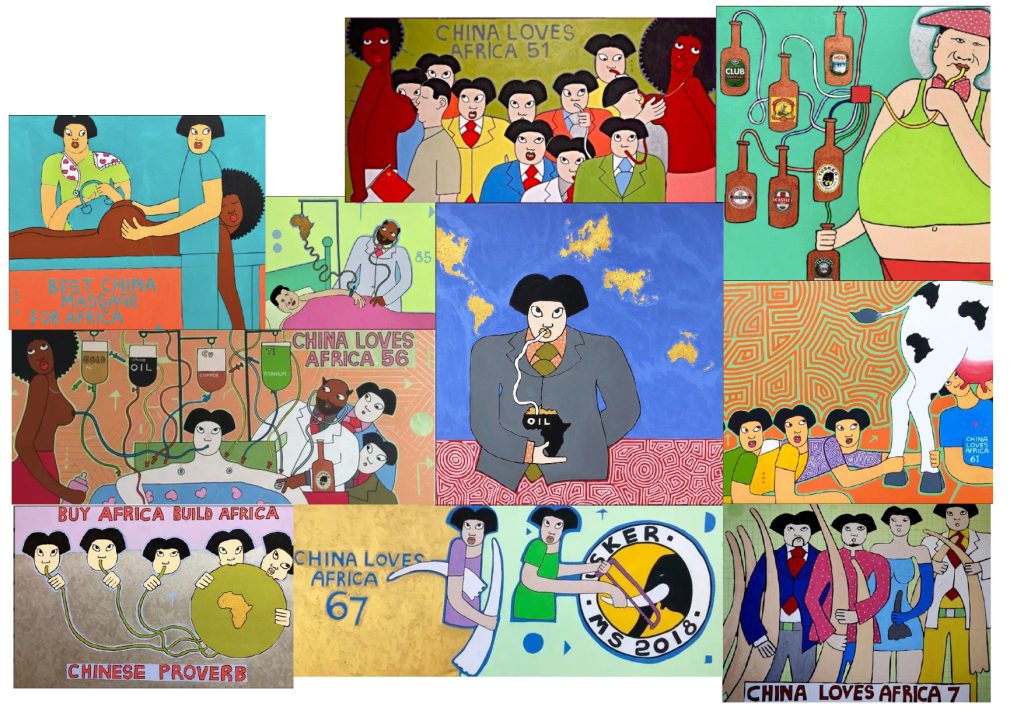 Withal, in some of these paintings, such as 56 and 85, the Chinese character is on a hospital bed being fed the infusion filled with African resources and being babied -Africa is holding a baby bottle. Such a representation offers a counternarrative to the discourse of Africa as starving or needing resources from elsewhere, seeing as in Soi’s paintings Africa is the one feeding others. Doing so, Soi portrays Africa as being self-sufficient -in none of the paintings does it seem like Africa needs anything from outside countries. According to him, it is only the African elite who seems to get something from China.

The theme Elites encompasses paintings that depict the relations between China and African or Kenyan elites. In these compositions, the action of milking or drinking from a pipe returns, but instead of the Chinese, it is now African elites filling their stomachs. In Soi’s work, elites are represented by a character that is very large and often wears suits. This is to portray the elite as greedy. In painting 80, elites are drinking directly from the Chinese dragon, while non-elites are milking it and barely getting a few drops. This is to suggest that African elites reap the benefits from Chinese involvement in Africa, at the expense of ordinary Africans who may think they have a chance. In this painting, we can see a character on the left wearing a red Jubilee shirt. Jubilee is a political party in Kenya that promotes involvement with China as very positive and benefiting the people. Through this composition, Soi is saying that the party is misleading its supporters to believe that relations with China will benefit them when really it benefits the elites in the Jubilee party. This is similar to painting 87, where African elites are seen giving Africa to Xi Jinping in exchange for money. 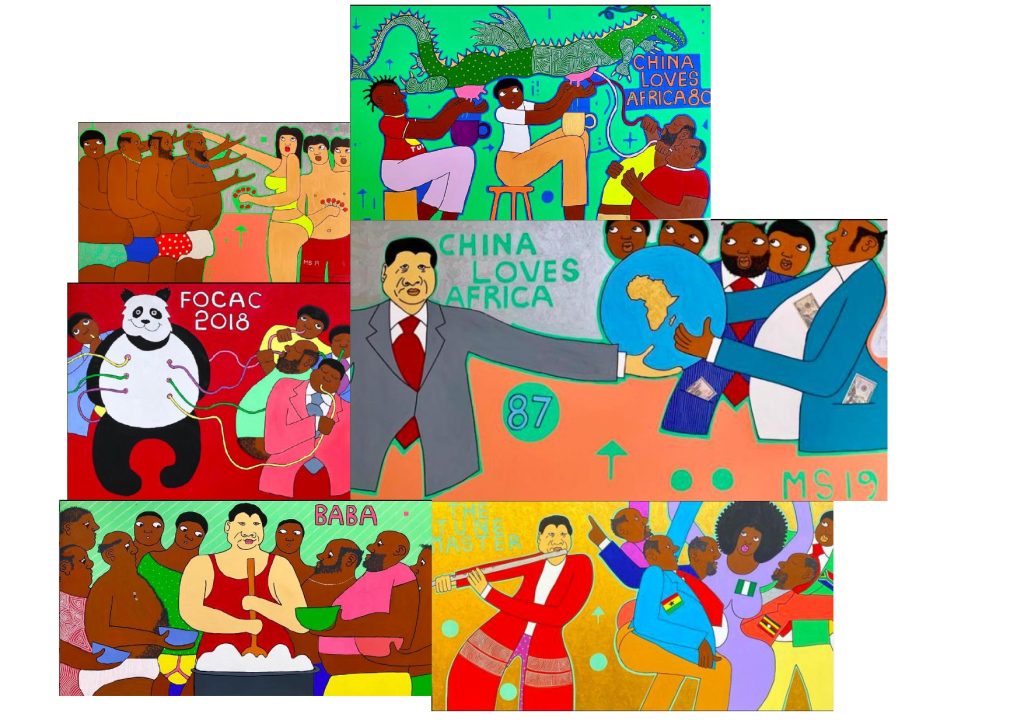 Additionally, in “The Tune Master” Xi Jinping is portrayed as a snake master, making what appears to be elite from different African countries -with the suit, larger forms, and flags- dance. Thus, Soi is also trying to say that African leaders are being manipulated by China.

This theme encompasses the pieces that display the relations between China and Africa as romantic relations. In these drawings, we see China as seducing or having personal and intimate relations with Africa. For Soi, relations are a symbol of influence.  The earlier paintings, namely 1, 2, and 39, show China and Africa as having intimate relations while Uncle Sam, the symbol of the US government, watches in awe. In later paintings, such as 63, 68, 71, and 84, China and Africa’s relationship are mostly portrayed as China taking Africa away from other potential lovers, the European Union (EU), England, or the United States (US). The western characters are represented with sad and thwarted expressions. 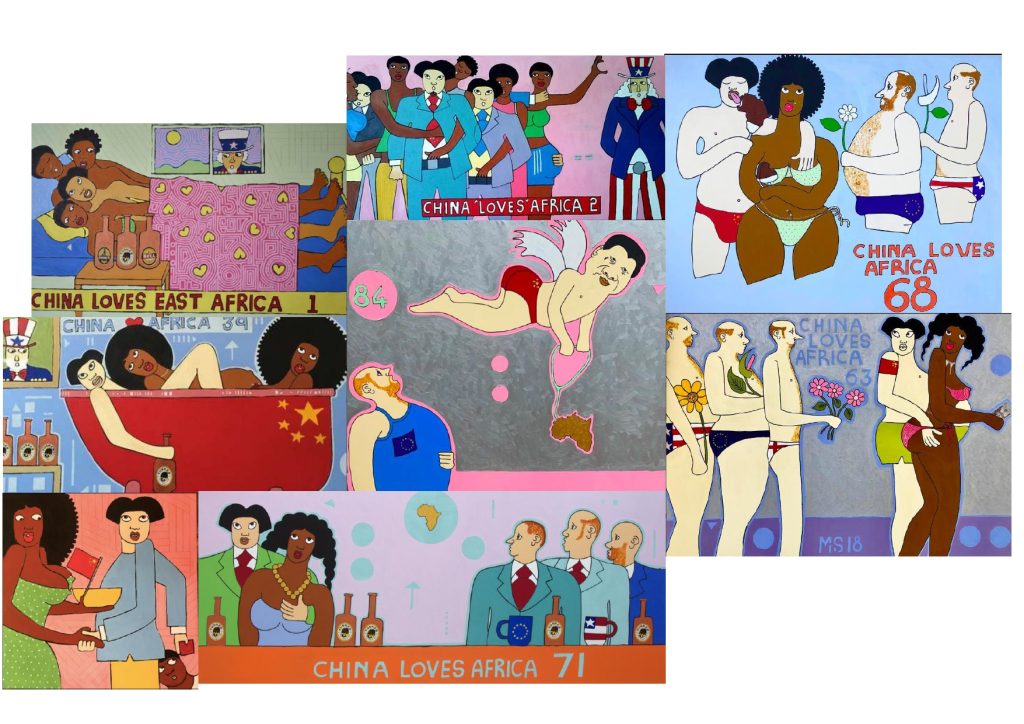 In some of the paintings, it seems Africa is being courted by different actors that are promising something different. For example, Western actors are offering different flowers but China is offering money or chocolate ice cream, which Africa has chosen. In this collection, Michael Soi asserts that China is having a stronger hold on Africa than other actors such as the EU, England, or the US. Additionally, the money and chocolate ice cream can be understood as gratification, as if Michael wanted to say that Africa made the self-indulgent choice for relations.

Through this collection, Michael Soi mocks the narrative that China loves Africa and has no ulterior motives for its investments of billions of dollars into the continent. He aims to go against the discourse of China being an alternative partner for Africa with mutual benefits. Through his exaggerations and juxtapositions of icons, indexes, and symbols, Soi wants to share with his audience that Sino-Africa relations are not as they seem and he wants his audience to be more critical of them. Through his paintings, Soi is telling his audience that China is extracting African resources for its own needs. He also expresses that it is mainly African elites who are benefitting from these relations. Finally, he wants to shed light on China’s growing influence on Africa which is becoming more dominant than other external actors such as the EU, the US, or England. Either way, he provokes and draws his audience into a debate that is often avoided.