In this project I am trying to analyse the discourse surrounding droughts in Africa as topics in Dutch newspapers. I have chosen 6 newspapers from a broad spectrum of newsmaking. They are roughly divided into three categories; secular or religious, progressive or conservative and left or right wing. The papers chosen are all national and among the biggest news outlets in the country.
De Volkskrant (VK), Trouw, Algemeen Dagblad (AD), Telegraaf, Nederlands dagblad (ND) and Reformatorisch dagblad (RD).
Although the reality is not as black and white as portrayed here, they roughly line up like this:

Like I said, these categories are quite arbitrary and non stationary. For instance there are left wing people reading AD and right wing people reading Trouw. But the general consensus, together with popular polls among readers, has made me decide to categorize them like this.

Contextualisation
Before we go into the deeper analyses of the discourse around African droughts, first we have to look at the context in which many readers learn about the topic. This will also show why these newspapers are categorized like this. Using the online newspaper archive Lexis Nexis database, a total of 420 articles mentioning drought in Africa appeared. Out of these, only 34 articles have drought, or the direct consequences of drought, as their main topic.

The first thing which becomes obvious is the amount of articles mentioning drought in Africa. The time frame is from january 1st 2017 until november 31st 2022, so almost 5 full years.
The religious papers clearly have the most with ND at the top with 111 articles, Trouw following with 97 and RD with 95. Left wing newspaper VK follows at a distance with 68. The right wing, secular newspapers clearly have made a conscious choice to write about other topics with AD only having 32 articles and Telegraaf having a stunningly low 18 articles.
The topics which contextualize drought in Africa for the readers of the chosen newspapers, expressed in percentage of total topics, are as followed. 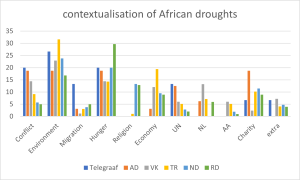 Some things become immediately clear.
Secular papers write more about conflict and less about religion than religious papers.
In turn, religious papers write most about hunger. Religion and hunger seem to be closely connected topics. although right wing papers also mention hunger a lot.
Left wing papers write less about migration and hunger, but more about economy and environment.
Left wing and secular papers also wrote most from the perspective of African agency (AA), this is using local African sources to tell their stories, but also from Dutch perspectives. You can see this as a more personal approach, and less pure news oriented.
right wing papers write more about the United Nations (UN). telegraaf specifically wrote most about migration.

These findings are not very surprising to me. It makes sense that right wing, conservative newspapers write more about topics like migration, conflict and the United Nations. These are also topics in national politics which right wing, conservative parties criticize and use as scapegoats in their rhetorics.
The same goes for the left wing, progressive newspapers writing about topics as economy and the environment. Topics, which their readers are more attracted by from their political standpoints.
I do find it interesting that there seems to be a correlation between religion and hunger. Many of these articles use phrases like “miss the blessing, nothing remains” or calling grains “koren” in Dutch. These are ways of speech directly taken from the bible and use the way the bible talks about droughts in their news reporting.

To conclude which newspaper you choose to read already makes a big difference in the way you will contextualize African droughts. Some read about it in the context of the environment or economy, some in the context of conflict or hunger. These are wildly different ways of looking at drought and will most likely heavily influence the way you think about the topic and what it means in this world.

Who writes it?
Now we have established the context in which the readers learn about African Drought, we can discover if there are differences between newspapers in the discourse on these specific topics. I have chosen a total of 34 articles which have African drought as their main topic, not just mentioning it while talking about things like the environment or economy.
First analysing it, it became apparent that who writes the article has a big influence on the topic, wording and message of an article. VK, ND and Trouw all have around 50% of their articles written by African correspondents, the other 50% by editorial employees. When you look at RD, AD and Telegraaf there is a total of 12 articles written between them of which 11 are written by editorial employees and only one by a correspondent.

Looking at the topics in these articles it shows that articles written by correspondents have two big differences with editorial pieces
correspondents use African sources at a much larger scale than editors. editors in their turn, largely use NGO’s and international institutions as the UN and WHO as sources.
correspondents seek for a positive note in their articles, while editors almost always lack positivity in their articles.

What do they write?
To compare the different newspapers in the way they write about certain topics I have chosen certain articles about similar or identical topics. The two examples are about drought in Zimbabwe and on Madagascar.

Firstly, the way Trouw and VK wrote about drought in Zimbabwe and Harare specifically. The VK article was written by correspondent Mark Schenkel and the Trouw article by foreign affairs editor Erik van Zwam. Two newspapers with a similar political stance and similar values. The big difference is who the article was written by.
The Trouw article starts with a summary of crises in Zimbabwe like a “shortage of food, gasoline, medicine and electricity” accompanied by the sentence “how many plagues can a country handle?”, immediately placing the drought in a context of state failures. It takes away the specific effects of drought by implying it is just another problem hurting Zimbabwe.
The VK article however, starts with two whole paragraphs on the “unusual drought” in Zimbabwe, accompanied by a statement by a UN employee. This puts the drought in a separate category which seems to absolve the leaders of Zimbabwe from this problem. It is also stated that “the drought in the once so productive Zimbabwe cannot be attributed to president Mnangagwa”, followed by how the worsened effects because of matters such as corruption can be his fault.

The wording differs between the articles as well. In Trouw strong words are used like “volstrekt ontoereikend” (completely inadequate) and “gierende inflatie” (soaring inflation). The Trouw writer also uses conditional terms like chemicals which “should be” on their way and last night “there should have been” water again. Using these terms he implies that the institutions do not function the way they should function, placing not only the people in charge but the whole infrastructure of the country under question.
VK uses more neutral terms to describe the situation. Where Trouw calls the inflation “soaring”, VK correspondent Mark Schenkel calls it “so high only Venezuela beats them, according to independent researchers”. And where Schenkel talks about the state “having a considerable debt … qualifying for the world bank through drastic changes”, Trouw editor
Erik van Zwam talks about the country staring into an “economic abyss … while president Mnangagwa becomes more violent in suppressing protests against his failing policies”.

The second example covers two articles on drought in Madagascar, written by Linda den Hollander, an editor for Reformatorisch Dagblad and by Carlijne Vos, an editor for de Volkskrant. Two very different newspapers with different audiences, but both written by editors.
To start with the similarities. They both use a spokesperson from an NGO as source, although RD uses a christian NGO and VK a secular NGO. They both talk about climate change as a factor in the drought. Lastly, they both talk about a sort of duty for us to care for these people. VK calls it “our moral duty” while RD talks about “christian virtue”.
However, there are also differences in both wording and topic. VK talks about climate change being the cause in confirming terms. Calling it a “direct consequence of climate change”. RD is a tiny bit more sceptical saying the UN “states it is a direct consequence of climate change”, making it more of a (scientific) opinion than a pure fact.
RD also talks more about the failures of the Madagassi people adapting to the climatic changes, while VK only talks about the people as victims of climate change.
This is a trend in most of the articles in general. African are rarely portrayed as contributors to their problems but almost exclusively as victims to the issues. RD is the only newspaper who actually talks about the agency of Africans in the problems cause by drought. While the other papers rarely talk about the causes of drought, except for climate change, and mainly talk about how it hurts the local people.

To conclude, the biggest difference between articles is depending on who writes it. Not the person itself so much but mainly if they are a correspondent living in Africa, or if they are an editor in the Netherlands. The similarities in writing are more concentrated within these two professional groups. Of course, the newspapers make choices as to whom writes the articles. And left wing newspapers clearly have more correspondents and freelance writers in the continent writing about these topics than right wing newspapers.
However, I cannot conclude from these articles that which newspaper someone writes for is the deciding factor in the differences in wording and topical choice, merely the choice of said newspapers for which type of writer they choose.
I did not expect this so much as thought there would be clear differences in wording and topics between newspapers. The real differences however are mainly in whether a newspaper deems a topic newsworthy and whether they have correspondents or not.