By Idil Samatar and Emma Veľasová 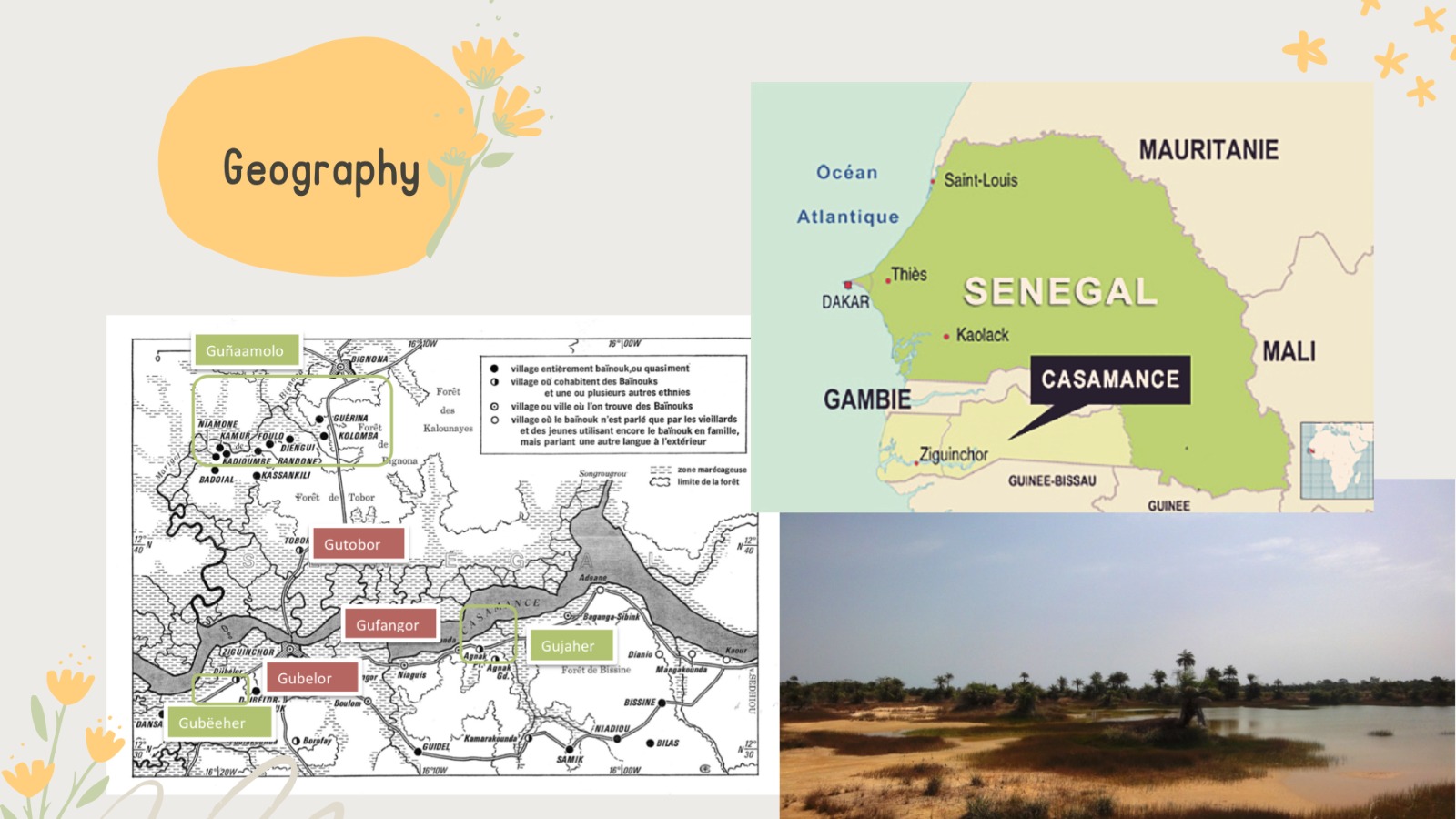 The factors that we have identified are historical, socio-economic, practical, and educational. To begin with the historical factors, both the Bainounk and the Kasanga people are considered to be indigenous to the Casamance region (Lupke, 2010). However, the region started to experience an influx of settlers from different ethnolinguistic groups, and along with wars with neighboring communities, this led to an increase of Joola and Mandinka speakers (Lupke, 2010). The loss of territory and the influx of Joola and Mandinka speakers started a linguistic assimilation process for the Bainounk speakers (Lupke, 2010). Another important historical factor is that the Bainkouk speakers were among the people who were most affected and subjected to the slave trade and as such the community lost many of its speakers (Lupke, 2010). 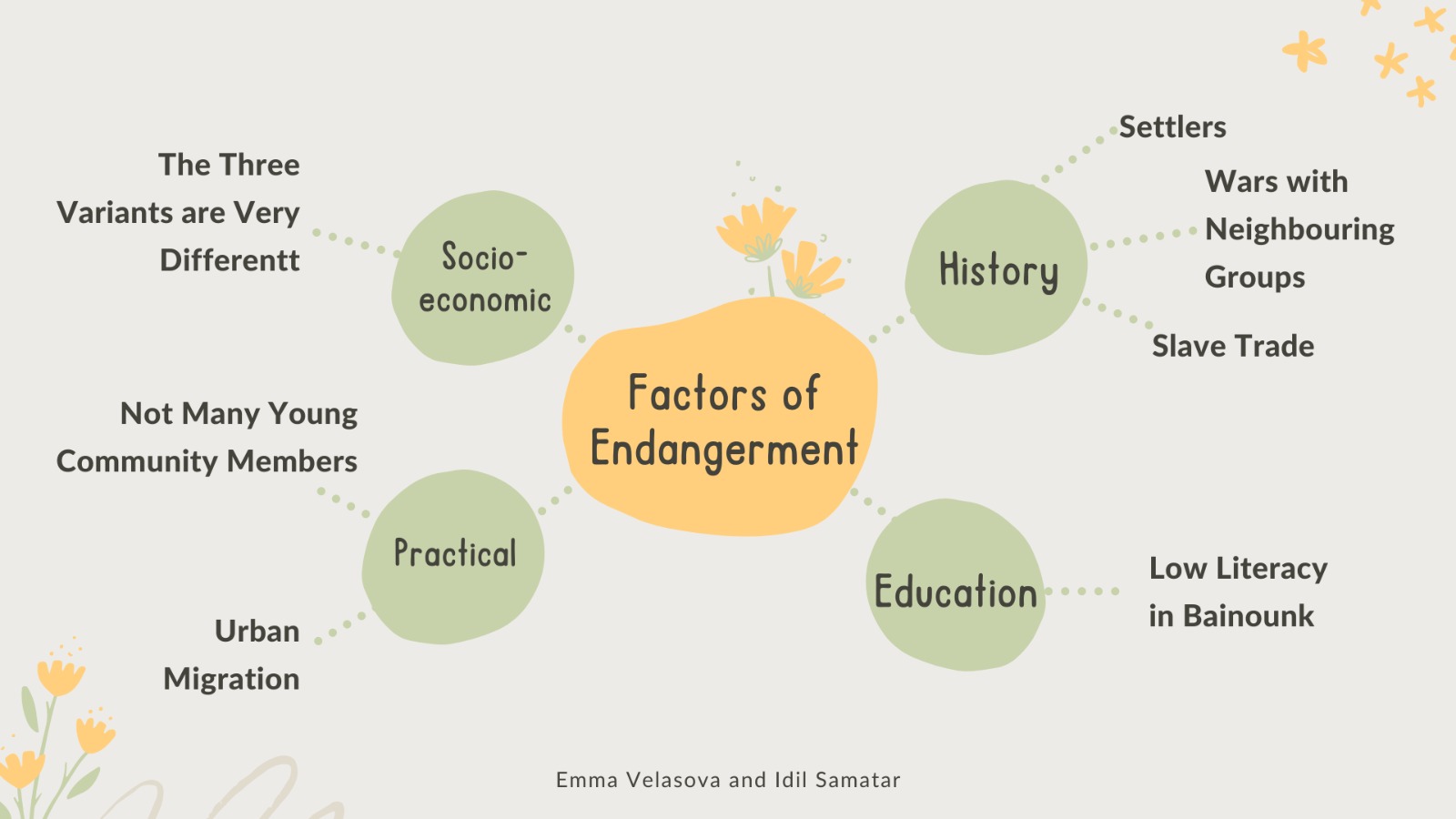 Moving on to more contemporary reasons for the declining numbers of Bainounk speakers there are the socioeconomic and practical factors. First, the youth members of the Bainounk communities tend to migrate to cities for both educational and economic advancements (Lupke, 2010). In addition to that, the Bainounk speakers have little interaction with other Bainounk variants as they are not mutually intelligible. Even members of BOREPAB, an indigenous organization aimed at protecting the Bainounk language, communicate in French because they do not usually speak other than their own variant of Bainounk (Lupke, 2010). Finally, in terms of education, there is a low literacy rate in Bainounk. In fact, as was discovered by Lupke, only a fifth of the Bainounk speakers have literacy skills in their native tongue, since French (the colonial language) is used in more formal settings such as education (Lupke, 2010). Improving literacy in Bainounk, producing more books, and teaching young people to write in Bainounk is perceived by the speakers themselves to be the most efficient way to protect the language. 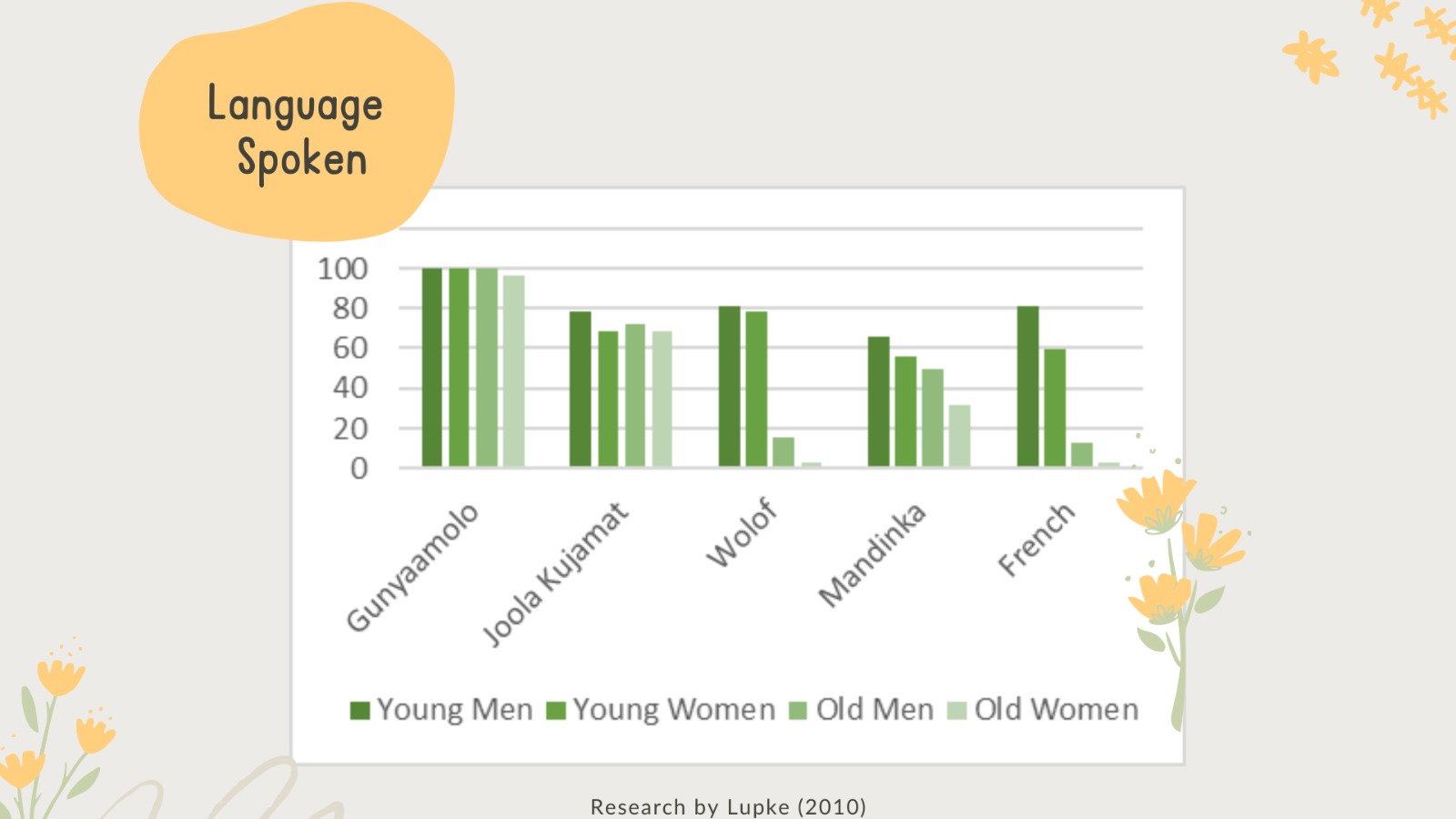 The Position of Bainounk among Other Languages

Today, French and Wolof are being utilized more as lingua franca in Senegal, including the Casamance region (Lupke, 2010). As mentioned, the Bainounk communities are linguistically diverse, and you can see in the graph above the different languages spoken by the Bainounk communities. In the graph, we can see how young people are becoming more linguistically diverse, but according to Lupke’s research, they do not see this multilingualism as a threatening factor to the existence of Bainounk. They also see the Mandinka and Joola languages are a part of their identity. Instead, a majority of the Bainounk communities believe that it is important to work on their literacy skills in Bainounk. Finally, they seem very hopeful about their future, and they believe that their communities will always speak their native languages (Lupke, 2010). 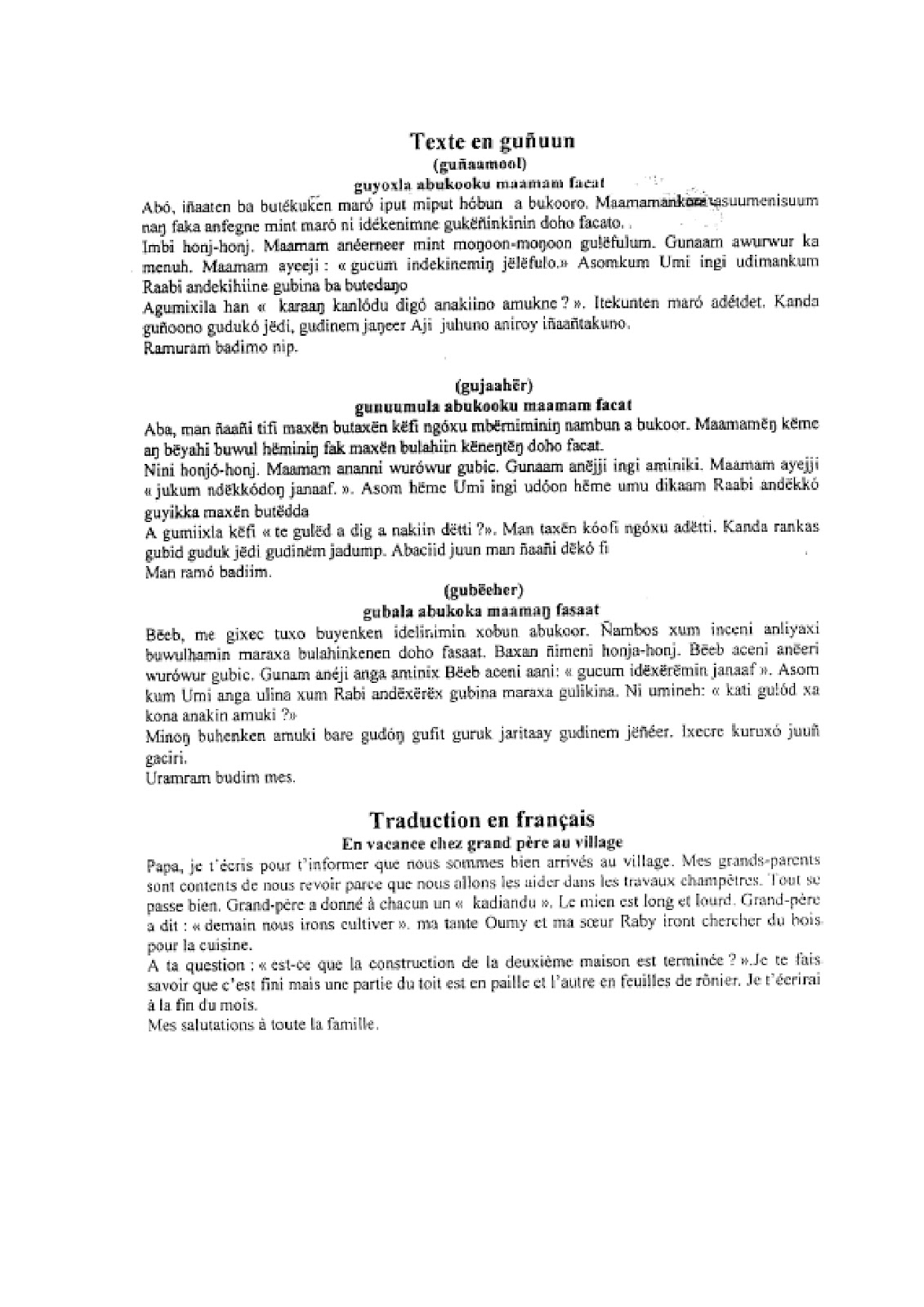 The same text in three main variants of Bainouk from Lupke (2010).
Reflection
The Bainounk languages are by far not the only indigenous language that is slowly disappearing as a result of migration and power relations. Luckily it has received considerable attention from researchers such as Lupke and Cobineh, and platforms such as DOBES (Documentation of Endangered Languages) and ELP (Endangered Languages Project), as well as local efforts to preserve Bainounk language in particular BOREPAB (Bureau d’Organisation, de Recherche, et d’Etude du Patrimoine Baïnounk). However, there are many languages that barely receive any attention despite the linguistic value they have, but also the richness of indigenous knowledge and heritage that is being transferred through these endangered languages. As researchers, but also simply as humans living in the 21st century, we should be more attentive and sensitive to the concept of language endangerment. Either by learning these indigenous languages, supporting the art and literature conveyed in the specific language, or simply by not expecting everyone will learn the dominant language just to communicate with us. The respect and appreciation need not only to come from linguists and cultural heritage organizations, but also from us, ordinary people, who see and understand the richness and value of linguistic diversity, and language as a means to shape knowledge, identity, and even the future.
Sources
Cobbinah, Alexander. 2010. “The Casamance as an Area of Intense Language Contact: The Case of Bainounk Gubaher.” Journal of Language Contact 3(1): 175–202. https://doi.org/10.1163/19552629-90000010.
DOBES. 2017. “Bainounk.” Last modified June 18, 2017. https://dobes.mpi.nl/projects/bainounk/.
Lupke, Friederike. 2010. “Language and Identity in Flux: In Search of Bainounk.” Journal of Language Contact 3 (1): 153–74. https://doi.org/10.1163/19552629-90000009.
Weidl, Miriam Maria. 2022. “Which multilingualism do you speak? Translanguaging as an integral part of individuals' lives in Casamance, Senegal.” Journal of the British Academy 10 (4): 41-67.https://doi.org/10.5871/jba/010s4.041.