Attitudes toward alcohol use during pregnancy among women recruited from alcohol-serving venues in Cape Town, South Africa: A mixed-methods study

To examine this delicate topic, I want to share what a talented group of researchers discovered when they carried out research with a group of 200 women! And more interestingly how did they get mothers to talk about this in an honest and informative way? Let’s take ourselves from Scotland to a township in South Africa, 11 miles outside Cape Town! Why you may ask! Did you know the Western Cape has an extremely high documented rate of FASD throughout the world? Putting this in context, in the USA the occurrence of FASD can vary between 2-5%. In this particular region of South Africa the estimates reach 18-26% thus, this was an ideal location for the group to dig deeper. They had access to the urban community here and had permission from the owners of eight venues that served alcohol. They also were aware that the female demographic they want to seek answers from between the ages of 18 to 45 frequented these eight establishments.

The age-old question is, how do you approach women in a bar? In this context, local women assisted with approaching the women, carrying out the surveys in the local language. Being of the same ethnicity established an initial connection. The survey took 20 minutes covering 79 items. Female customers were approached inside the establishments before they consumed alcohol to ensure the interactions were legitimate. Of 200 women anonymously contributing to the survey, a further 23 agreed to be interviewed to gather more in-depth stories and personal backgrounds. This is where questions were posed about attitudes, alcohol consumption knowledge, and behaviors. The surveys were answered, and stories unfolded to paint a more informed picture. A mixed methods approach firstly yielded data from the surveys to understand some of the patterns and findings. The interviews then allowed for another layer of information to unfold. 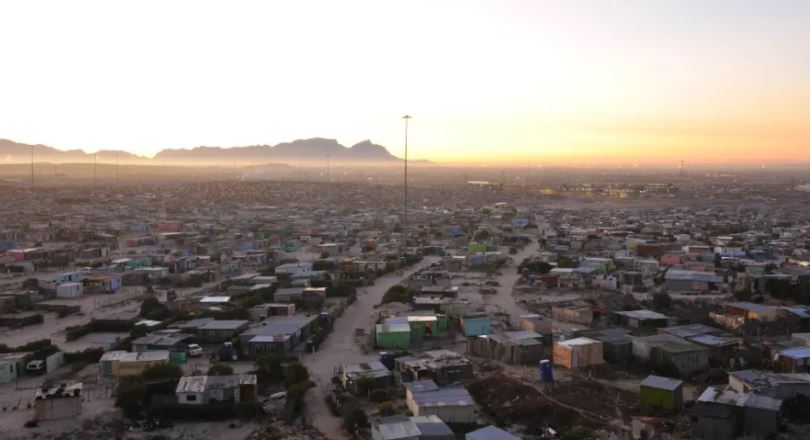 In seeking answers, the type of information sought from the women concerned covered topics such as attitudes toward alcohol use during pregnancy, any history of abuse, details of any depression symptoms, their current drinking behavior and also drinking behavior while pregnant. Additionally, questions on the circumstances around getting pregnant, and attitudes to pregnancy were included. All of the women submitted personal information about age, education, relationships, work status, religion, and income as is standard practice in most quantitative survey approaches. Thankfully in the research world, we have creative tools where we can enter this data and look at it from various different scenarios. Information such as the percentage of unplanned pregnancies is a relevant factor to capture for those who may still use alcohol during the pregnancy. Additionally, factors such as mental health during the period of the pregnancy or any level of abuse or stress in the home environment may play a role in connecting alcohol consumption behaviors.

So what is different in this particular community that gives rise to these high percentages? This is what was discovered from the findings in summary. The majority of women had been pregnant with two or more children at that time. More than half the participants were deemed to be classified as hazardous drinkers during pregnancy, with one-third deemed binge drinkers. However, when asked questions regarding pregnant women drinking during pregnancy the attitude or intention of most women was that it was indeed harmful. In their communities, it was common for women to drink while pregnant thus their environment did not shun this practice. Some also thought one type of alcohol, such as beer was not as harmful as spirits or wines to drink while pregnant. The reality was that the drinking behavior was different from the attitude! It was found from those drinking that indeed they did have a history of abuse, some with depression or bad relationships in the family. Many found comfort in attending the bars for support and friendship purposes. Some shared that while knowing children born with health complications or indeed having a child with health complications from alcohol, they didn’t think it would happen to them.

This blog is indeed a summary of interesting data and findings uncovered. I hope to not do it any injustice by such a summary but at the end of this blog, you will find some tables to examine for those who want to delve further into the findings. Overall, the attitude-behavior gap from this research can lead us to believe that knowing something is harmful, and avoiding it are two different things. Improvements in family planning, information during pregnancy, and support for the personal issues women experience could help further to prevent or limit cases of FASD. Let us hope research such as this eventually helps to understand and prevent such health issues in communities moving forward. 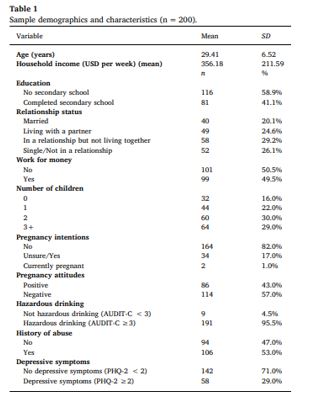 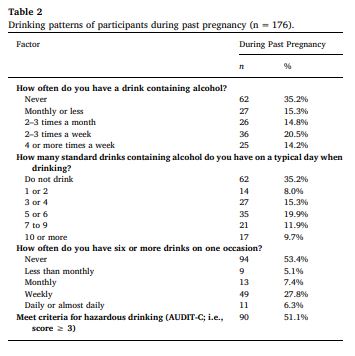 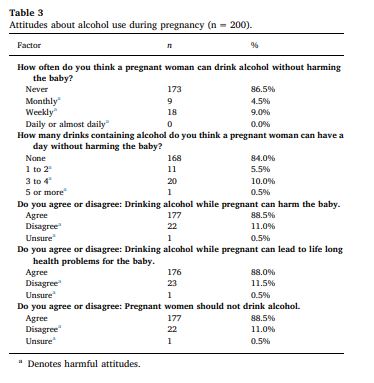 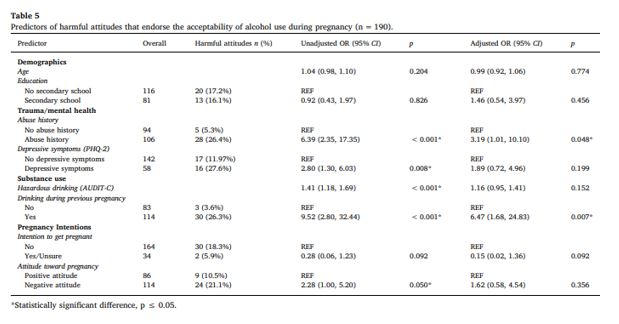