Ugandan Demographics: Rich and Diverse or Complex and Convoluted?

In our podcast, we talk a lot about Uganda’s ethnic and tribal diversity. But what do these 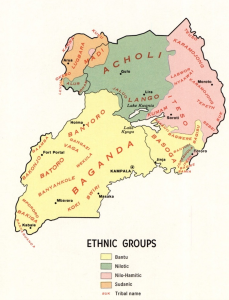 categories even mean? Let’s see if we can break it down somewhat:

People belonging to one ethnic group share the same religious, linguistic, and cultural identity, as well as a common ancestry or historical background. They are not bound to one area of living.

A tribe consists of a set of related families with similar tastes, ideology, religious and dialectic identity. They live together in one place.

Uganda’s inhabitants are composed of three to four different ethnic groups. They are believed to have migrated from different places and then settled in different locations around the country, as well as across the borders to the neighboring countries (though keep in mind that modern borders were drawn by colonial forces)

The largest ethnic group in Uganda, the Bantu, are spread throughout Central, Southern, Eastern Africa, and Southeast Africa. Consisting of about 400 distinct tribal groups native to 24 countries,  within this category several hundred Bantu (appr. 400-700, depending on the definition of ‘dialect’ and ‘language’) languages are spoken. The Bantu are divided into several tribal groups, the largest being the Baganda, whose population consists of over 10 million people (as of 2019). Other tribal groups are the Basoga, Bagwere, Banyoro, Bayankole, Bakiga, Batooro, Bamasaba, Basamia, Bakonjo, Baamba, Baruuli, Banyole, Bafumbira, and the Bagungu, all of whom have their unique languages and dialects. The languages with the largest amount of speakers within the Bantu peoples of Uganda are Luganda, Runyankore, Lusoga, Rukiga, Masaba, Runyoro, Konjo, Rutooro, Lugwere, Kinyarwanda, Samia, Ruuli, Talinga Bwisi, Gungu, Amba, and Singa. The lingua franca between the Bantu peoples of Africa is Swahili.

The Nilotic peoples (also: Luo) originate from the Nile area and are spread mainly throughout Eastern African countries. Inside Uganda, they have mainly settled in the North. Tribes within the ethnic group include the Langi, Acholi, Alur, Padhola, Lulya, and the Jonam. The Nilotic languages are linguistically divided into Eastern, Southern, and Western Nilotic languages, each of which are spoken by Nilotic populations in Uganda. One of the larger tribal groups within the Nilotic peoples are the Acholi, which make up about 2 million of Uganda’s population (as of 2014). Their dialect is a Western Nilotic language, named Luo (Lwo). The Nilo Hamites (also: Central Sudanic peoples) are mainly located in the Eastern part of Uganda. Their tribes include the Karimojong, Iteso, Langi, Kumam, and the Kakwa.

The Sudanic peoples inhabit the northwest of Uganda.

Within Ugandan tribes, there are quite some cultural differences, including certain ceremonies, dances, staple foods, economic activities, dress, art, religions, and – what’s most important regarding the content of our podcast – languages. As we discus in the podcast, the fact that many languages are spoken throughout Uganda – and finding a common language is not always possible – creates challenges regarding the connection between the Ugandan peoples, as well as creating a common sense of identity. There have been attempts to instate Swahili as the lingua franca in Uganda and surroundings, and although it has not been enforced yet, it might be a good solution to promote better communication among the peoples of East Africa and to elevate the status of Swahili as an international language.

A regional identity presumes the common characteristics and shared identity of numerous nations and ethnicities in a specific region.

The formation of the Organization of African Unity (OAU) led to a strengthened identification between African leaders towards each other. It also supported the rise of a Pan-African identity that transcended the boundaries of the borders made by colonists. People mainly identified through their common oppression by Europeans through the implements of slavery, racism, and colonization. A shared identity often holds a shared history, and common obstacles that can be overcome together.

The OAU maintained a strong commitment to respecting state sovereignty and the sanctity of the existing borders. The successor of the OAU is the African Union (AU), which focused more on the African people than on the states. The AU declared its right to intervene in ‘grave circumstances’ with the Assembly’s approval, which shows a movement towards collective governance.

In East Africa, serious proposals have been considered for joining together as a single sovereign state. In 1967, the East African Community (EAC) was established by Kenya, Tanzania, and Uganda. It fell apart in 1977 due to ideological differences and conflicting economic interests among the state leaders but was revived in 1999. In 2007, Burundi and Rwanda, and in 2016, the Republic of South Sudan became full members of the EAC. This year, the Democratic Republic of Congo also became a member. The main goal of the EAC is to expand and deepen economic, political, social, and cultural cooperation. In the long term, a federal state is to be created through the creation of a customs union, a common market, and a common currency. There’s a common court, the East African Court of Justice and a parliamentary assembly, the East African Legislative Assembly. Since 2010, the EAC also has a shared anthem.