“They are talked about, but rarely are they listened too”

The report: “A right to be heard – interactive data visualization” by UNICEF (2018) caught my attention. Somehow, I was triggered by the words ‘interactive data visualization’, because this is one of the central topics in the course ‘Researching Africa in the 21st century’. More specifically, how do we make (written) research visible by the use of digital media tools?

For this report, UNICEF used digital media by conducting a poll via U-Report This is an international free social media platform whereby participants could answer nine multiple-choice questions and one open-ended question via SMS or social media. There where exactly 3922 respondents, who identified themselves as migrants and refugees. All the respondents are between the age of 14-24. According to UNICEF, too often young people are invisible in data reports. UNICEF considered this age category as old enough to be able to answer their questions.

This report by UNICEF  focuses on all the continents of the world and the written report explains the situation of migrants and refugees in general. However, the interactive part, where people can look at the poll results themselves, one can focus on the region Africa. The African continent contains 27% poll respondents who said they were migrants and refugees aged 14–24. The concept of interactive data visualization is simple. You select a question and find out how young migrants and refugees answered this. You can specify the answers in categories of age, gender and region.

With this poll, UNICEF wanted that children and young people with a migration status told about their experiences so that their voices would be heard and perceived elsewhere (UNICEF, 2018). Too often young migrations and refugees are placed in detention centres, without considering the effects of their development and health. Moreover, UNICEF puts the results of this poll on the agenda as advice for policymaking for ‘Global Compact for Safe, Orderly and Regular Migration and the Global Compact on Refugees’.

However, between the lines I read that via this poll, UNICEF wants to create awareness and empathy by governors and political leaders who are in charge of the migration policy. This is emphasized in the section ‘destinations’: “In destination countries, migration and refugee asylum have become contested and sometimes divisive topics in recent years (UNICEF, 2018, p.22).” This is mainly the case in the western world, migration is a contented political topic. Especially in right-wing (populist) political parties. Focusing on the debate in Europe, far-right parties are on the rise. These parties argue that migrants from Africa and Asia are fortune-seekers and they have no rights to come to Europe. 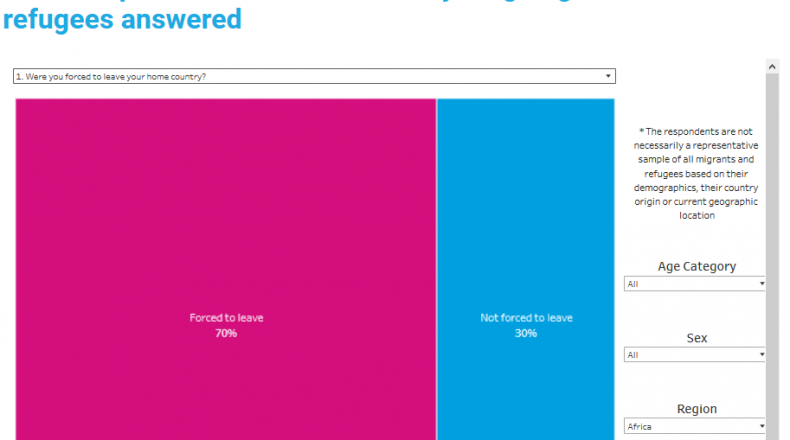 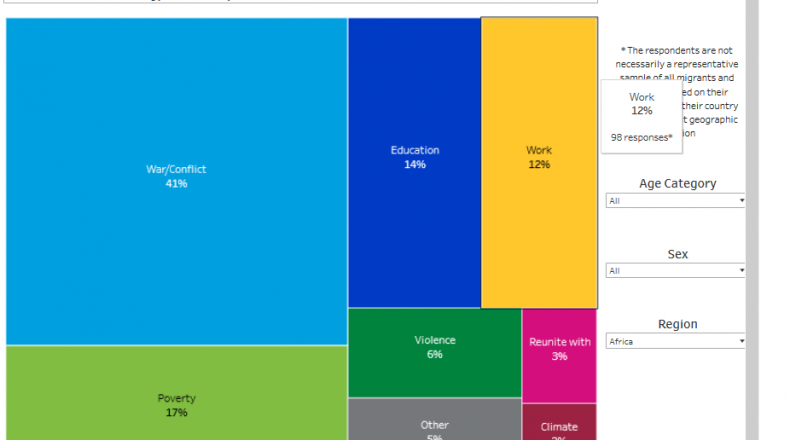 The answers of the two questions can create more sympathy among policymakers who are sceptical of migrants and refugees. The first answer shows that seventy per cent of the respondents are forced to leave and the second answer reveals that the main reason for this is war and conflict. So with this data in mind, it shows that the young refugees and migrants felt unsafe because of war/conflict and did not have a choice to stay in their country of origin. When you can select by yourself certain questions, and you see the precise categories of gender and age, somehow the percentages become more touchable and less abstract.

Yet, the data of UNICEF is somehow constructed, but UNICEF is reflective about their data gathering: “The respondents are not a representative sample of all migrants and refugees because they do not come from a full range of demographic groups, countries of origin or current geographic locations. In addition, the poll respondents are not representative because they have access to the internet or mobile phones, and they have at least basic skills with technology, which is not true of all refugees and migrants (UNICEF, 2018, p.8)”.

Even though the data is not 100% representative, UNICEF tried to give young migrants and refugees a voice and a platform to express their concerns and experiences. Via the interactive poll, the data became more accessible and open. Furthermore, this poll addressed the rights of young migrants and refugees to be heard, instead of being talked about.