The story behind the graph of Mauritius’ economy

The graph below shows the evolvement of the economy of the republic of Mauritius. The graph supports what is stated in the chapter ‘Mauritius economic success uncovered’ in: The Mauritian paradox. Fifty years of development, diversity and democracy (2018).  The chart is computized by the authors, Verena Tandrayen-Ragoobur and Harshana Kasseeah, both associate professors of the University of Mauritius. They bring forward how the island’s economy has undergone a structural change over time, between 1976 and 2015, ‘reflecting a successful economic diversification strategy’. Their story tells how an economy of a small island nation, that is successfully connected with global trade networks, can adapt and renew itself.[1] 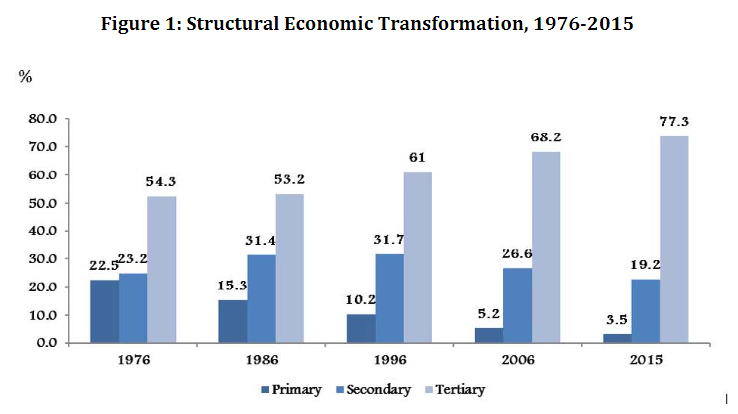 Brief explanation of the graph.

Over the years, the share of the primary sector has declined, while the share of the services sector followed an upward trend. In the early 1970s, Mauritius was a monocrop sugar economy. It had inherited this state of the economy when it had become its independency from the United Kingdom in 1968. In the 1980s Mauritius diversified to the secondary sectors of textile and local manufacturing. In the 1990s greater diversification with tourism evolved and the economy developed the tertiary services sector with financial services and a freeport. In the latest stage of modern age Mauritius’ economy is being perceived as a business platform for ICT business, real estate, seafood alongside the existing sectors of sugar, textile and a heavy dependency on tourist industry.[2]

The story behind the graph.

In the year where the graph starts, 1976, the sugar economy was already in decline. History reveals the story behind the sugar plantations leading up to this point: what it meant for human diversification and for the islands ecology.

The first sugarcane sprouts were planted by the Dutch. They found the island on route to the East by chance in 1598. They were attracted to its uninhabited state, lush forests and rivers with fresh water. In the seventeenth century the Dutch East India Company built a fort and colonists tried out agriculture. They also started logging the ebony forests. The island only became of agricultural importance under the French, who occupied the island from 1715 until 1810. They expanded the sugar cane cropping and ebony logging. The British took over in 1810 and converted the island into green blanket of sugar cane plantations. Mauritius became the sugar supplier of the British Empire.[3] The key factor in workforce was the importation of indentured laborers from India. Between approximately 1820 and 1920 thousands of men and women emigrated to Mauritius under the lure of a future with a certain income.[4] Their descendants now make up two thirds of Mauritius’ population. The remainder consists of the descendants of enslaved people from Africa, Chinese workers and French and British colonists.[5] Mauritius is now one of Africa’s most densely populated countries with 1,4 million people on an area as large as approximately the Dutch province of Utrecht.

The real ontold story is that of the destruction of Mauritius’ natural resources and ecosystem. The chart below is taken from Sietze Norder et al., ‘Assessing temporal couplings in social–ecological island systems: historical deforestation and soil loss on Mauritius’ (2017).[6] The series of maps show that after gradual deforestation only 2 % of its endemic forest is left standing. 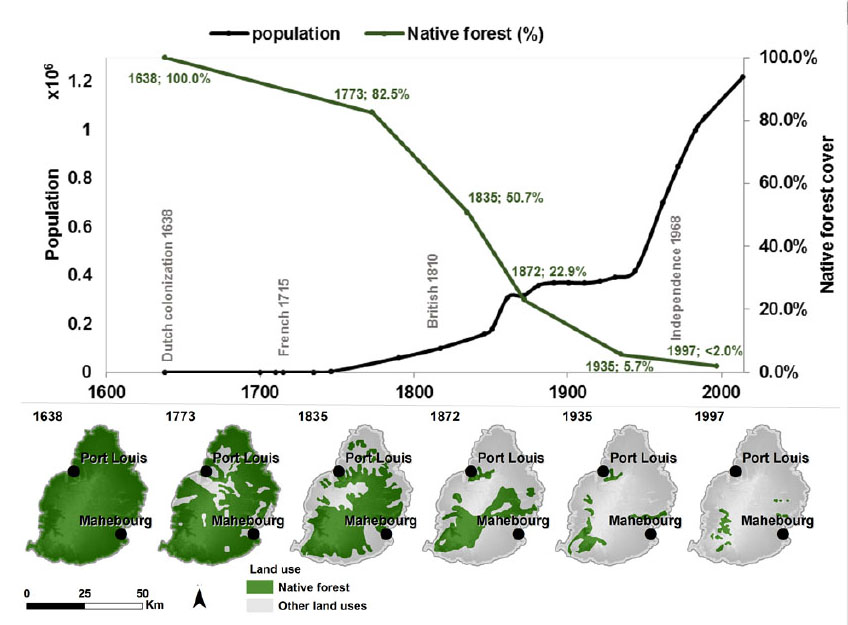 The deforestation has caused heavy soil erosion, which in itself is a threat for the well being of the economy. According to Norder et al.: ‘soils provide ecosystem services, such as water and nutrient retention, and form a substrate for agriculture’.[7] The true current state of the islands’ socio-ecological system (meaning the link of social actors and institutions with the treatment of the land an nature) is obscured by view because of Mauritius’ interconnectedness with global trade. Mauritius imports food, beverages and fuel. This takes away the drivers for want of land-system change.

Norder et al. hypothesize that the continued reliance on imports from distant sources allows for a further development of ‘soil debt’. In the long term the expected increase of erosion is not sustainable. In accordance with this finding is the statement of Tandrayen-Ragoobur and Kasseeah, saying that the Mauritian trade balance has shown a deficit since independence, which has continually worsened over time. There is much more import than export. They however blame the negative terms of trade shocks, the financial crisis of 2007-2008 and an increasing competitiveness from emerging countries.[8] In fact, nowhere in the lustrum volume of The Mauritian paradox. Fifty years of development, diversity and democracy, the looming effect of soil erosion is mentioned, which contradictory to the fact that according to the authors of the introduction the retorical question is raised if and how the ‘economy will shift towards more sustainable practices?’[9] A quick word analysis of the volume shows that the combination of the words ‘sustainable development’ only occurs twice. Mauritius’ miracle economy could prove to be of a temporarily nature if the exploiters don’t take care of the land.