Nigerian English: A variety of English or just ‘bad English’? 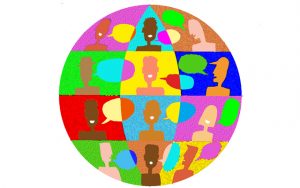 Nigeria, like many other African countries, has a multilingual landscape the number of languages spoken in Nigeria today is estimated to be between 500 and 600 languages. Through British colonialism the English language became an integral part of the country and is today spoken by approximately 20% of the population. Nigerian English, also known as Nigerian Standard English, is the most widely spoken African variety of English, not to be mistaken with Nigerian Pidgin which is used as a lingua franca in the country. Nigerian Pidgin is a form of colloquial English and is the most spoken variety amongst Nigerians especially amongst natives who live in the villages. Nigerian English on the other spectrum is only used in politics, in an educational setting and in the media. Through its contact with other native languages Nigerian English has become a distinctive variety of the English language. Nonetheless, it is still difficult to define Nigerian English as it is often dismissed as merely being a form of ‘bad English’ and thus not a variety of the English language like American English. As Farooq Kperogi states ‘Nigerian English has not yet been purposively standardized’[1](Kperogi,2015). The linguistic features and characteristics of Nigerian English are so unique to Nigerian culture that Kperogi (2015) argues that Nigeran English should be considered as a variety of its own. According to him Nigerian English is based on four fundamental concepts:

To illustrate these four linguistics features I will closely analyse an extract from a televised interview with Patrick Obahiagbo, the Chief of Staff to the Edo State Governor. This interview was featured on the Sunrise TV Channel and aired (on YouTube) on July 27th, 2013. The extract of the interview that will be used for this close reading is titled ‘Rivers crisis: These Issues Are Bringing Calamitous End for Nigeria’.

The main linguistic features one notices from Obahiagbo’s interview is how heavily he relies on old British English norms. He uses a lot of Old and Middle English expressions that are no longer used today by standard English speakers. For example, at the beginning of the interview when he is asked to explain what he thinks is happening he uses the word ‘crinkum-crankum’ in his sentence. This expression is from the mid 17th century and is a reduplication of the noun crank meaning elaborate detail or detail. To the standard English speaker of the 21st century this word is rather unknown. Another example of the usage of old-fashioned British expressions is the word ‘odoriferous’ used by Obahiagbo. Odoriferous is another expression of the late Middle English and of Latin origin and it means unpleasant smell. Different from the former example, by deconstructing the word from its main noun which is ‘odour’ the standard English speaker of today can guess the meaning of the word. These archaisms are expressions that derive from Old English and are outdated in any other variety of English. In Nigeria, they are a ‘result of Nigeria not being located at the centre of the evolution of a language, which causes one to blissfully be unaware of current trends and shifts in meaning and usage’ as explains Kperogi (2015).

Language improvisation is another interesting linguistic feature in Nigerian Standard English, here Nigerian sayings are translated into the English language even if they do not make sense per say. In his interview Obahiagbo does not necessarily do this type of language improvisation but instead he composes new words to give meaning to a specific political concept. He uses the word ‘Kakitomoboplutocracy’ to refer to the state of affairs in his country. Kakitomoboplutocracy is a word composed of three words namely:

One can thus define Kakitomoboplutocracy as a hybrid government of these three forms of governments. Here, language does not solely function as a means of communication, but it also represents the unique political setting of Nigeria. In other words, language is not only a method of communication but it also represents its people and their culture, since language affects thought and thought affects language.

Lastly, what is also noticeable from the interview are the repeated grammatical errors that appear to be intentional rather than mistakes. In Nigerian English grammatical errors that have been often repeated over the course of time have been incorporated into the language. These errors however should not be seen from a standard English point of view but rather as a derivation of standard British English. These errors are often noticeable in verb constructions, when asking Obahiagbo to give his explanation of the current state of affairs, the reporter states ‘What are your thoughts about what is being happening …’. Grammatically speaking this is incorrect but in Nigeria no one would see this as a mistakealthough the correct tense would have been ‘what’s been happening’ or ‘what is still happening’. This is similar to African American English Vernacular (AAEV) where the use of double negation is also normalized. This might explain why Nigerian English is seen as a form of bad English and not a variety of English, since grammatical errors are normalised.

Another typical Nigerian English feature is the usage of both American English and British English. Although, American English is also a variety of English it has become standardised due to the international role American culture plays. Therefore, when speaking about the English language one is often confronted with two main standard varieties, AmericanEnglish and British English. Nigerian English, however incorporates both these varieties uniquely into its language and sometimes goes as far to create new words using both these varieties. As an example, Kperogi (2015) uses the word ‘torchlight’ (used to refer to a portable lamp) which is a confusion of the British word ‘torch’ with the American word ‘light’. Unfortunately, there are no demonstrations of this linguistic characteristic in the interview.

To conclude, Nigerian English shows certain features that make it a unique variety of English, as it embodies old English with modern varieties of the English language. It seems as if Nigerians cause the original meanings of some words to be altered to accommodate their cultural usage patterns. However, since Nigerian English has its own unique syntax and phonology that differs from standard English, Nigerian English cannot be used outside of its social spectrum. Upon further investigation, the comment section of the interview shows that Nigerian English is also a variety that is difficult to understand by the natives. Some commentators mentioned that the variety Obahiagbo uses differs from the one they learn at school, which I assume is a standard version of English. This also explains why Nigerian Pidgin is used as a lingua franca in the country instead of this variety of English. Regarding the question if Nigerian English can be considered as a variety of English, we would have to first define what we consider a variety and why some varieties are more prestigiousthan others. These are the issues that have become the central occupation when discussing the concept of dialects, language varieties and language purity. The privilege some language varieties have over others is often related to their historical context. In the case of Nigeria, an ex-British colony, colonialism introduced the language as a means of domination. Today Standard English it is the official language of the country and Nigerian English as well as Nigerian Pidgin are the second most spoken variety in the country. Perhaps this explains why Nigerian English is merely seen as a form of ‘bad English’ since the official language is still standard English. However, Tom McArthur (2003) argues that standard English has at ‘least three identifying characteristics: 1) It is easiest to recognize in print because written conversations are similar world-wide. 2) It is usually used by news presenters. 3) Its usage relates to the speaker’s social class and education’. As has been demonstrated through Obahiagbo’s interview Nigerian English is applicable to every category but McArthur definition of what is standard English is only one example and this definition can vary from country to country. It is this ‘lack of a clear, agreed-upon definition of the term standard [that] presents a problem […]’ states Farrell and Martin (2009). This suggests that there is no valid reason to not consider Nigerian English as standard form  of English, the difficulty lies on the importance we give certain language varieties over others.

Pennycook, Alastair, The Cultural Politics of English as an International Language, (England: Longman, 1994)