Money does not make you happy?

In the Master African Studies, we often talk about (economic) development. Yet, what matters most is happiness. Therefore, I wanted to know if there is a relation between GDP per capita and happiness. In order to find out, I consulted the world database of happiness. A study was exerted to examine this and one of the conclusions has been visualised in the image presented below. 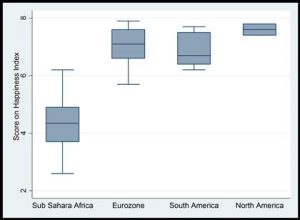 First and foremost, the image tells the reader that there is a trend between happiness and income. In the poorest region, sub Saharan Africa, happiness is lowest. In the two most rich areas, western Europe and northern America, happiness is highest. This trend is also confirmed by other research.

Yet, importantly, the statistics do not show how strong the correlation is. Given this trend, the correlation could be between 0.1 but it could also be 0.9. The implication of the correlation number is crucial for fully understanding what the relation between the two factors is.

Another important thing to be pointed out concerns to the definition of happiness. Historically, people have argued that it is not academically possible to properly research happiness because, according to them, defining happiness involved a high degree of subjectivity. For example, they argue that the perception of happiness differs per culture.

In conclusion, the statistics show a trend between income and happiness. Yet, it does not tell the readers how happiness is defined and how strong the correlation is.