The Netherlands is home to a wide variety of people with different ethnic backgrounds. It is important to understand how diasporic relations may be navigated within the country. This research focuses on Mama Africa, a club night event that is hosted in multiple cities throughout the Netherlands. It was founded in 2017, and gained quick popularity. The event solely plays music from the African continent throughout the night, and it has become a space for people with African backgrounds to reconnect to their cultures and express their identities. Sense of belonging refers to the “degree to which an individual feels respected, valued, accepted, and needed by a defined group” which all individuals strive to feel (Strayhorn, 2012, p. 785). The Netherlands seems to have a lack of spaces for those with African identities to reconnect to their cultures, and therefore this research explores the impact of Mama Africa. It aims to identify whether there are elements present that contribute to a sense of belonging, and if there are, to highlight the need for more spaces in the Netherlands where Africans can reconnect to their transnational identities. Therefore this research explored the research question: How do the spaces created by Mama Africa contribute to the sense of belonging of Africans in the Netherlands? In order to investigate this, we spoke to the organiser of Mama Africa and some attendees. Listen to our podcast below! 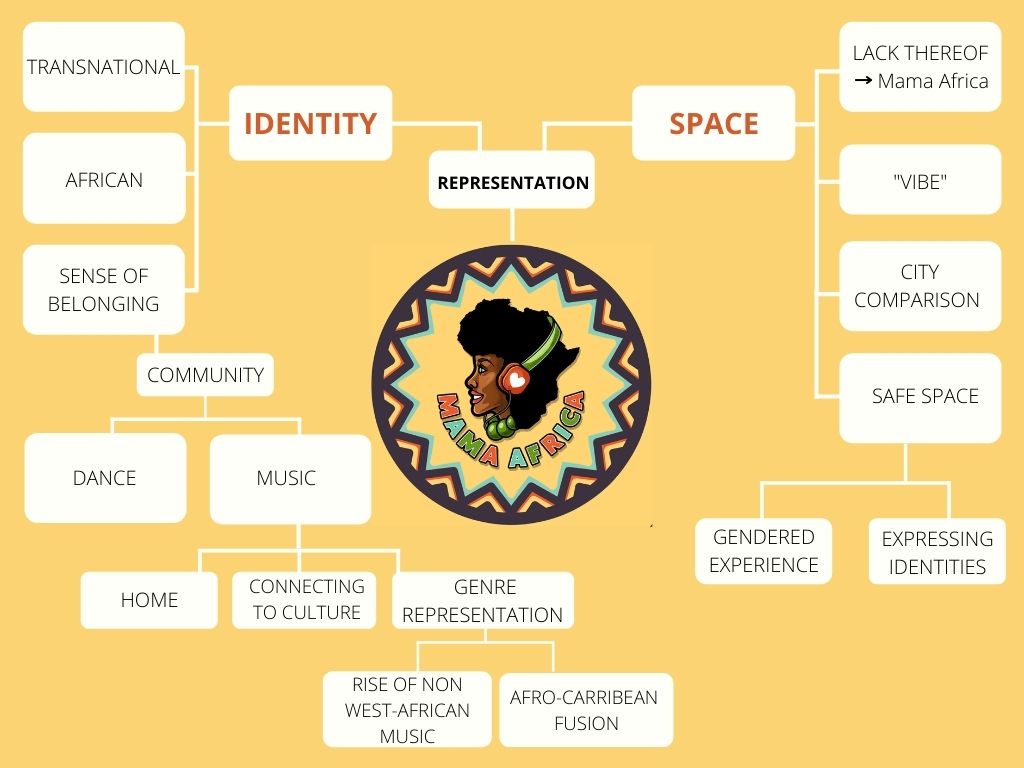 Transnationalism refers to “various kinds of global or cross border connections”, whilst identity, which the definition of has been contested over time, refers to “ways in which people conceive of themselves and are characterised by others” (Vertovec, 2001, 575). In diasporic studies, a lot has been written about the degree of attachment between someone's country of residence and their country of origin, and how this can change at different points in time. Furthermore, those who live in different countries than their country of origin always maintain forms of contact with the people and institutions from their respective country (Vertovec, 2001). This can be seen at Mama Africa. Attendees from Africa who currently reside in the Netherlands utilise the space in order to maintain connection to their home countries, and this is done in another country, which is the Netherlands. Each participant discussed broadly the importance to their transnationalism, and elaborated on how they may express this.

One of the main themes that contributed to the attendees’ sense of belonging at Mama Africa was the feeling of connecting to their roots and culture. Yuval-Davis describes belonging to be about “emotional attachment, and feeling at home” (Yuval-Davis, 2006, 198).  The attendees all referred to their country of origin in Africa, and elaborated on how Mama Africa reminded them of feeling like they were at home. It’s important to understand that all of these participants have a multi-layered identity. In another article, Yuval-Davis argues the importance of understanding citizenship as a “multi-layered construct” in which there are different layers such as “local, ethnic, national, state, cross- or trans-state and supra-state” (Yuval-Davis, 1999, 193). This highlights the importance of understanding that although Africans in the Netherlands may hold Dutch citizenship, or just live there, their other layers of citizenship such as their ethnic backgrounds should not be disregarded. The attendees stated that different club etiquette was present at Mama Africa that reminded them of their roots. Samira, an attendee, explained how the music can connect people in the club, and strangers can create a circle and dance together. This adds to the community aspect which is important in relation to her feelings of belonging. Lefika, another attendee, explained how he loves to dance, “nobody is looking at you weird, it’s normal”  whilst “dancing like that in another place might be weird” (Lefika, 2021). This highlights the different kind of space that Mama Africa offers and the freedom to express yourself is present through dance in order to reconnect to their own African identities.

The attendees cited music as feeling like they are able to connect to their roots and culture. Music has the ability to promote connection and trust, and it also allows individuals to reconnect with the world and avoid feelings of ostracism (Zhang, 2014). The attendees explained how listening to their songs from their country of origin at Mama Africa helped increase their feelings of belonging in that moment. At that moment, the participants did not feel ostracised as they might feel in regular Dutch society. Lefika mentioned in the discussion that he was “tired” of “overcompensating trying to prove you’re not a stereotype” in everyday Dutch society (Lefika, 2021). This may heighten feelings of ostracism, however, this feeling did not exist when he was listening to Amapiano, a genre of music from Southern Africa that is gaining popularity and being played in Mama Africa. In this regard, the genre representation of Mama Africa is quite wide. Regularly at clubs who promote themselves as playing “African music” often stick to the popular genre Afrobeats. Though, this is not the case at Mama Africa and the organisers ensure that the whole continent is somewhat represented during the night. One interesting insight that was provided in the discussion with the attendee Samantha, is the need for an Afro-Latin fusion event. Samantha, who was raised in Botswana but has origins in Peru, highlighted that Latin America has high influences from Africa due to the slave trade (Samantha, 2021). Therefore, there are a lot of similarities in the music, and it is almost an “identity loss” to the Latinx community that African music is underrepresented.

Mama Africa does host the event in different cities. Most of the attendees have attended more than one city for the event. However, differences were mentioned based on the experiences the attendees had. For example, Lefika used to live in Enschede, but mentioned that he would travel all the way to the Hague for a Mama Africa event, because it was better. Similarly, Samira mentioned that she had gone to Utrecht, but the event in The Hague was also better. Both of them attributed similar reasons for why the event succeeded better in the Hague, and it was in relation to the diversity present. Reconnection to their African identities seemed easier if the event night was also diverse, instead of what the attendees see in regular Dutch society everyday. This is related to social identity theory, as when someone sees themselves as part of a group, then self-esteem can be heightened (Chen, 2009). Therefore, it can be said that the attendees and their self-esteem is higher in places where there is more diversity, and their group identity is being reinforced in the space and also their feelings of belonging.

The space created by Mama Africa is unique, as it is the only club event in the Netherlands that solely plays African music. Our interviewees described it as an environment with great ‘vibes’, which was largely due to the people, music, and dancing. This allowed them to reconnect with their African heritage and freely express all parts of their complex identities. One interviewee even described it as a place “I went to feel like I belong” (Lefika, 2021). As mentioned before, some interviewees noted a difference when Mama Africa was held in different cities. In Enschede for example, the public that attended the events was less diverse than in The Hague or Amsterdam, which is most likely directly linked to the (lack of) ethnic diversity in these cities. Although the ‘vibe’ was different because the majority of the public was white, one of the interviewees mentioned the importance of having events like Mama Africa even in less diverse cities in order to normalize the playing of African music and to create a space where people with ties to or an interest in the continent can find each other.

The term safe space was first used by feminists in the late 20th century (Kenny, 2001, as cited in The Roestone Collective, 2014). Since then, it has been used in different contexts of oppression, including in queer and civil rights movements. Although there is not one correct definition, it is always associated with a space in which marginalized groups are “free from violence and harassment” (p. 1346). In these spaces, people can express themselves freely without having to fear discrimination on the basis of their identity. As explained by Crenshaw (1991), identities are intersectional, which refers to the idea that different forms of oppression overlap as well as interact. This is especially interesting in the context of safe spaces, as the complexity of one’s identity is reflected in the personal feeling of what does or does not constitute a safe space. These complexities were also present in our research, when the interviewees were asked about their experiences at Mama Africa.

Whether or not the interviewees considered Mama Africa to be a safe space, seemed to be dependent on their gender. The male interviewees referred to safety in the physical sense of the word. One of them compared it to the safety back home where getting your phone stolen on a night out is very common, and concluded that Mama Africa was “not unsafe”. The female interviewees were more hesitant to call it a safe space, which is in line with The Roestone Collective (2014), who explain that gendered power relations are at the root of feelings of unsafety. The female interviewees differentiated between cultural safety and physical safety. Mama Africa provided a cultural safe space in terms of the music and people, especially compared to regular club events, because it allowed them to express their African identity more freely. In terms of physical safety, their experience at Mama Africa was similar to other club events because the club scene generally does not feel safe and thus requires them to be more alert. In addition, they explained that Mama Africa tends to be male dominated and they described the men’s dancing as occasionally “quite wild” and “touchy”, which can feel intimidating and uncomfortable.

Pauwels, Luc, and Dawn Mannay. “Multimodality and Multimodal Research.” In The SAGE

Strayhorn, T. L. (2012). Exploring the impact of Facebook and Myspace use on first-year

The Roestone Collective. (2014). Safe Space: Towards a Reconceptualization. Antipode,46(5),

Ryan, 25
Organiser
"We were like, what's really missing? ... So we wanted to tackle African music"
Samantha, 22
Attendee
“Music is supposed to connect everyone and different cultures … what’s needed is a space where Latin American music and African music can come together”
Fari, 26
Attendee
“Listening to music I hadn’t heard outside of my own house was really nice. It kind of felt like home”
Samira, 21
Attendee
“Mama Africa offers a different kind of safe space than a general club or party would offer”
Fixx, 24
Attendee
“It’s where I went to feel like I belong, you know?”
projectaitnl2021