How do you like Drew Binsky’s Top 12 Travel Tips in Africa?

This is part of our blog series. Click the links below to see the other two episodes.

A critical perspective on language use in travel vlogs (Janina)

Mozambique is Portugal in Africa? (Ryohei)

Vlog, video blog, has been developing rapidly and become a popular medium of sharing experiences, thoughts, and ideas with an audience. Being a popular vlogger can bring one a magnificent and influential power through creating vlogs. The governments’ tourism offices nowadays also like to work with travel vloggers to efficiently promote their countries’ tourism economy. This consequently strengthens the influence and credibility of the travel vloggers. However, how credible can the travel vloggers really be?

I recently watched a lot of travel vlogs in Africa on YouTube, and one of the YouTubers really caught my attention. Drew Binsky, an American travel vlogger who makes daily travel videos with over 1 billion views and 2.17 million subscribers by the end of 2020. It is quite impressive that he has visited 191 countries in the world by far, so I think it’s understandable for us audience to suppose that he has a quite open-minded and objective attitude towards this diverse world. However, as I watched more videos of him, I found many messages that he delivered in his videos disturbing. Here I will take one video of his as an example and share with you how it disturbed me.

This video is called “AFRICA: Top 12 Travel Tips”. It’s a very eye-catching topic that can potentially be very educational and helpful to the audience who either plan to visit some African countries or want to learn more about Africa in a fun and efficient way. Let’s see what tips he shared, and I will share my thoughts on them.

This tip doesn’t bother me. It totally makes sense to me to travel within Africa mostly by flying because in most areas in Africa where the infrastructure and other types of public transport can be very time-consuming and less reliable. However, do be aware that there are some breathtakingly beautiful train rides available on this massive continent. Also, think about the possible ferry options when there is water. 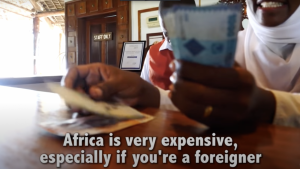 Here, Drew explained why he recommended travelers to bring extra U.S. dollars by saying, “Africa is very expensive, especially if you’re a foreigner.” This message really disturbs me. I would agree if he says international brand luxurious hotels and flight tickets in Africa are expensive compared to most parts of the world. I also agree that it is important to bring some extra cash, especially U.S. dollars or Euros, since they are widely accepted in most African countries. However, to generally say “Africa is very expensive” is not acceptable to me. If Africa is very expensive to an American vlogger, I wonder how he would think local African people can survive the very expensive daily lives with their world-known low income. This is making no sense. 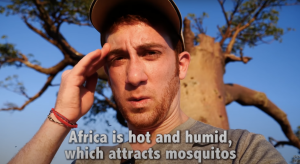 Of course, it’s smart to bring bug spray when you’re in a humid summer-ish place where mosquitos are trying you eat you up. Even the bug sprays were sold out in many stores when I went sailing in the Netherlands during the hottest days this year, but “Africa is hot and humid”? Seriously? I can’t believe this is said by someone who just spent two whole months in 15 African countries all the way from South Africa to Somalia. Yet he still talked like Africa is a hot and humid tropical city, which strengthens the stereotype of thinking of Africa as a permanently extremely hot place and the climate is making people suffering. Uuuugh, I made exactly the same move as Drew when he said that because it gave me a headache. 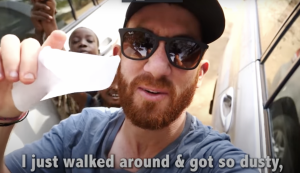 Drew said wet wipes are a must-bring when visiting Africa because Africa is very dusty. What do you expect when you’re driving on a dusty country road? I doubt if there would be enough dust to “destroy his skin” when he’s walking in the city. So I couldn’t help rolling my eyes. Do you find it offensive when he simply described Africa as a dusty, dirty place? 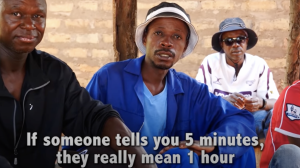 I agree that it’s good to have patience, especially when you’re travelling because things don’t go the way you’re used to in a different country and culture. However, drawing such an arbitrary conclusion that in Africa, “if someone tells you 5 minutes, they really mean 1 hour” isn’t really smart, is it?

A smile usually brings you good luck, so why not?

It’s surely nice to see more than the cities in Africa and try to have a more comprehensive impression of Africa.

That really depends on the case. If public transport or taxis are not really handy, why not equip yourself with a local driver?

I am not sure if this is an important tip, especially for visiting Africa. 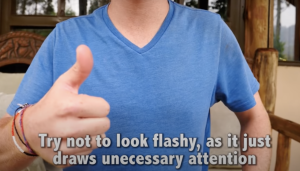 Is he implying that Africa is generally very dangerous? Should African fashion just simply be stopped, and everybody wears a plain V-neck T-shirt? I understand that it is smart to dress low-key in certain districts of certain cities, but to generalize the whole situation this way doesn’t sound very smart.

Why are you travelling if you’re not mentally prepared? What do you think he’s trying to say by sharing this “tip”?

Africa has already suffered severe cultural violence in the way of countless misunderstandings and stereotypes. I find that many messages Drew Binsky delivered in his video turned out to be legitimizing and even strengthening such misunderstandings and stereotypes. The content one puts out on the Internet for the public impacts everyone who consumes it, no matter how many followers one has. Thus, I genuinely hope social influencers like Drew Binsky, with multi-million followers, can be more responsible for the content created, by improving their level of knowledge and cultural awareness, to make it a better and more peaceful world. So, what do you think?