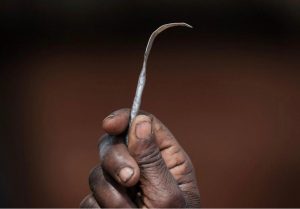 According to the World Health Organisation, more than 200 million women and girls alive today have been victims of female genital mutilation (FGM) in countries were it’s prevalent.  Roughly 3 million girls undergo this procedure every year. Most reports of FGM mainly come from Africa, as well as Asia and the Middle East. World Health Organisation used large-scale, national surveys asking women aged 15-49 years if they have or their daughters have been cut, in order to find an estimation of the prevalence of FGM. In this blog post, I will be doing a close reading of the data on FGM offered by World Health Organisation. 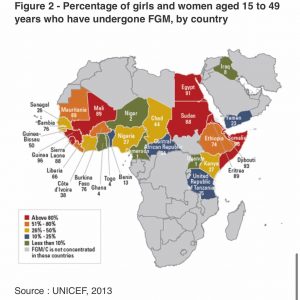 Female Genital Mutilation refers to any procedure where the female genitals are totally or partially removed, cut or changed, without any medical reasons. It’s also referred to as female circumcision, or Sunna, gudniin, tahur, halalays, megrez, among others.The World Health Organisation (WHO) classified FGM into three main categories or types:

Type 1 – Partial or total of the clitoris and the prepuce.

Type 2 – Partial/total removal of the clitoris and labia minora, with/without excision of the labia majora.

Type 3: Bringing together the labia majora and the labia minor together, creating a seal, with/without excision of the clitoris. This is referred to as ‘infibulation.’

Types of procedures may differ depending on ethnicity. According to WHO, 90% of FGM cases include Type 1,2,4 (nicking without flesh removed), and about 10% (8 million women) are Type 3, infibulation. Infibulation is the most dangerous form of FGM and is mainly practiced in East African countries like Somalia, Eritrea, Djibouti, Ethiopia, and Sudan. On the other hand, West African countries such as Mali, Burkina Faso, Guinea and etc, opt for Type 1, removal of the flesh (clitoridectomy) without sewing the labia majora and/or minora together. This comparison was insightful, however, the data failed to give us the reasons why certain ethnic groups opt for a certain procedure. Is there a religious or a cultural reason behind why, for example Somalia choose infibulation, and not Type 1. 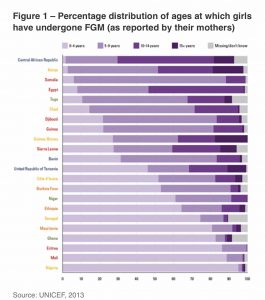 Figure 1 demonstrates the number of girls who’ve undergone FGM, as reported by their mothers. What was interesting about this figure to me, was the number of missing cases. A lot of FGM cases take place in rural areas, which may explain the missing cases and the disparity in numbers. One may wonder, if these cases are found and put into the database, would the numbers change drastically? Ghana and Senegal have the highest numbers of missing cases. This may explain why Ghana’s FGM cases is as low as 4% in Figure 2. Figure 1 also demonstrates that girls in countries like Nigeria, Mali, Eritrea, Ghana and etc, undergo the procedure from birth till the age of 4. It can be argued that this decreases the chances of adult trauma, compared to the trauma faced by girls in countries like Gunea-Bissau, Kenya and Central African Republic, who experience FGM as old as 15 and onwards.

These numbers reflect the tragic experiences of many young girls, some who’ve not survived at all. This data reveals the depth of FGM; for me, it illustrates the inter-sectional nature of this topic. FGM is linked to other issues concerning mortality, migration, and gender-based violence. For example, women and girls subjected to FGM end up having many children, have a higher risk of dying in childbirth, and are often victims of domestic violence. As such, addressing FGM will mean that we address other issues such as gender inequality, and encourage a holistic, sustainable, and a strong social change process. It’s important that programmes addressing issues of child abuse, such as child marriage, incorporate FGM as a means to broaden opportunities to advance change.

Overall, while this data offered by WHO is insightful, it fails to give us a deeper understanding of why certain countries opt for FGM and others don’t. One would assume that it may be due to religion, however, there’re many countries in Africa, that’re very religious, yet don’t practice FGM. It provides us with useful numbers, but it doesn’t go beyond that. In order to eradicate FGM, we need a more in depth analyses of why such practices take place in certain countries, or even why certain countries opt for a specific type of FGM and their inspiration behind such act.