The Appeal to the UN

The first of Tshibumba’s paintings chosen is entitled APPELLE A L’ONU:

This scene portrays the arrival of UN troops into Kinshasa during the first period of the Congo Crisis. The ‘Appelle a L’ONU’, or call to the UN, was made by the Congolese Government largely in response to the secession of Katanga, a southeastern province in the Congo. The secession lasted from July 1960 until February 1963, led by Moïse Tshombe. As tensions escalated, the secession soon became the nucleus of UN intervention in the Congo Crisis. In August 1960, UNSC Resolution 146 reaffirmed the UN commitment to maintaining the ‘territorial integrity’ of the Congo and declared entry of UN Forces into Katanga ‘necessary for the full implementation of the present resolution.’ In February 1961, UNSC Resolution 161 further authorised the ‘use of force’ for UN personnel, which was put into action throughout the following two years until the end of the Katangan secession in February 1963.

This painting was chosen from Tshibumba’s collection as it represents a direct portrayal of UN forces entering the Congo. Although the painting gives no exact date of arrival, it may be inferred that the ‘call to the UN’ depicted refers to the increased arrival of UN troops in 1961. As this is the first painting in Tshibumba’s collection sequence to depict the UN, a number of themes arise in their representation. Firstly, in the background of the painting there are three flags depicted: that of the UN, the Congo and the United States. In an interview with Fabian published in Remembering the Past, Tshibumba commented on the use of flags, stating (Fabian: 1996, 107):

there is an American flag, beside the flags of the UN and the Congo, because the Congolese were supported by the Americans.

Here, a connection is drawn by Tshibumba between the United States, the UN and the Congolese, one which is extended into a number of other paintings involving UN forces. Similar references to flags appear in Sapin’s work, particularly in relation to the United States and their role in the crisis. Below are two images from Sapin’s painting which place the United States flag as part of the noose responsible for the death of Prime Minister Lumumba, and atop a figure interested in Congo’s resources: 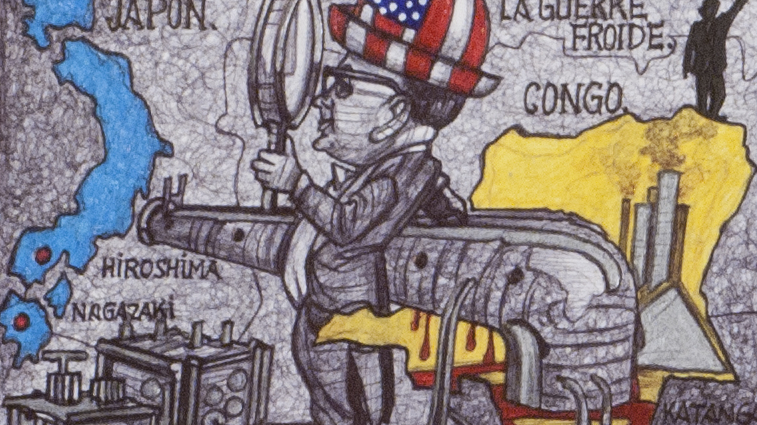 As seen in these images, the use of flags form a more critical element within Sapin’s artwork. As well as with other nations in the painting, the United States flag is used to represent criticism of external forces within the crisis. In contrast, Tshibumba states:

There was a celebration that day, that’s why there were three flags.

The characterisation of ‘celebration’ therefore represents a different view of United States intervention during the crisis. Tshibumba’s painting represents a time in which the Congolese Government requested external assistance, as opposed to the more critical hindsight of today’s analysis. The critical element of these works is therefore influenced by the time in which each were produced, as well as the personal narrative of each artist and his own history.

Secondly, in the same interview the composition of UN troops became a topic of discussion between Fabian and Tshibumba. In the interview, Fabian asks about the ‘red-skinned’ colour of the UN soliders, which Tshibumba states was chosen as ‘they were not of our colour’. Tshibumba then identifies UN soldiers as having been from ‘many nations’, with Indian, Ghanaian and Ethiopian among them. In contrast with a number of other works, the UN are represented not by European officials but by the varied nations which made up UNOC forces. Instead of focus on the UN officials and their place within diplomacy, here Tshibumba’s focus lies with the role of UN troops in the crisis. In almost all of Tshibumba’s paintings UN forces are represented in this way, which marks a contrast from a number of other works on UN involvement.

A third and final point which arises in the interview refers to a press photograph of the event which Fabian suggests may have influenced Tshibumba’s painting. The photograph Fabian refers to is pictured below:

In this photograph, Ghanaian peacekeepers are pictured arriving in Leopoldville (Kinshasa) in 1961. Similarly to Tshibumba’s painting, UN troops are depicted in formation in front of a number of planes, which in this photograph are identified as both Russian and American. In particular, American influence is mirrored, as the words ‘U.S. AIR FORCE’ are written on the plane pictured to the far-right. In both Tshibumba’s painting and the photograph, the involvement of external forces in the crisis is made clear through visual means. Although Tshibumba’s painting may not have been influenced by this photograph, as Fabian does not inquire during the interview, an interesting link can still be drawn between photography and painting as visual sources in history. Similarly to the role of the United States and the varied backgrounds of the UN troops, this third and final theme also reflects, at least in part, Tshibumba’s perception of the arrival of UN troops into the Congo. As such, this painting offers a significant representation of the UN within the Congo Crisis.

All images are copyright of the KIT Tropenmuseum, Amsterdam.

Chaos and the Cold War: The UN and the Congo Crisis Conflict