What is Hans doing here?

In the New Order: Last Days of Europe, Germany controls vast swathes of the African continent. Regular players are well acquainted with the three “Reich commissars” of Africa; Siegfried Müller the Mercenary, Wolfgang Schenk the Pilot and Hans Hüttig the Terroriser. They might not even question why these three men were chosen by the developers to be put in charge of the German colonial administration, but closer examination of the primary source material left behind by the real-world Colonial Policy Office reveals that the true candidates for these positions were either ignored or never discovered. When this becomes clear the standard TNO narrative in Africa suddenly becomes laden with all sorts of questionable decisions that warrant further academic scrutiny. Can we come to an understanding of what the original intent behind the German-African narrative was and is an alternative version of this narrative possible to construct? 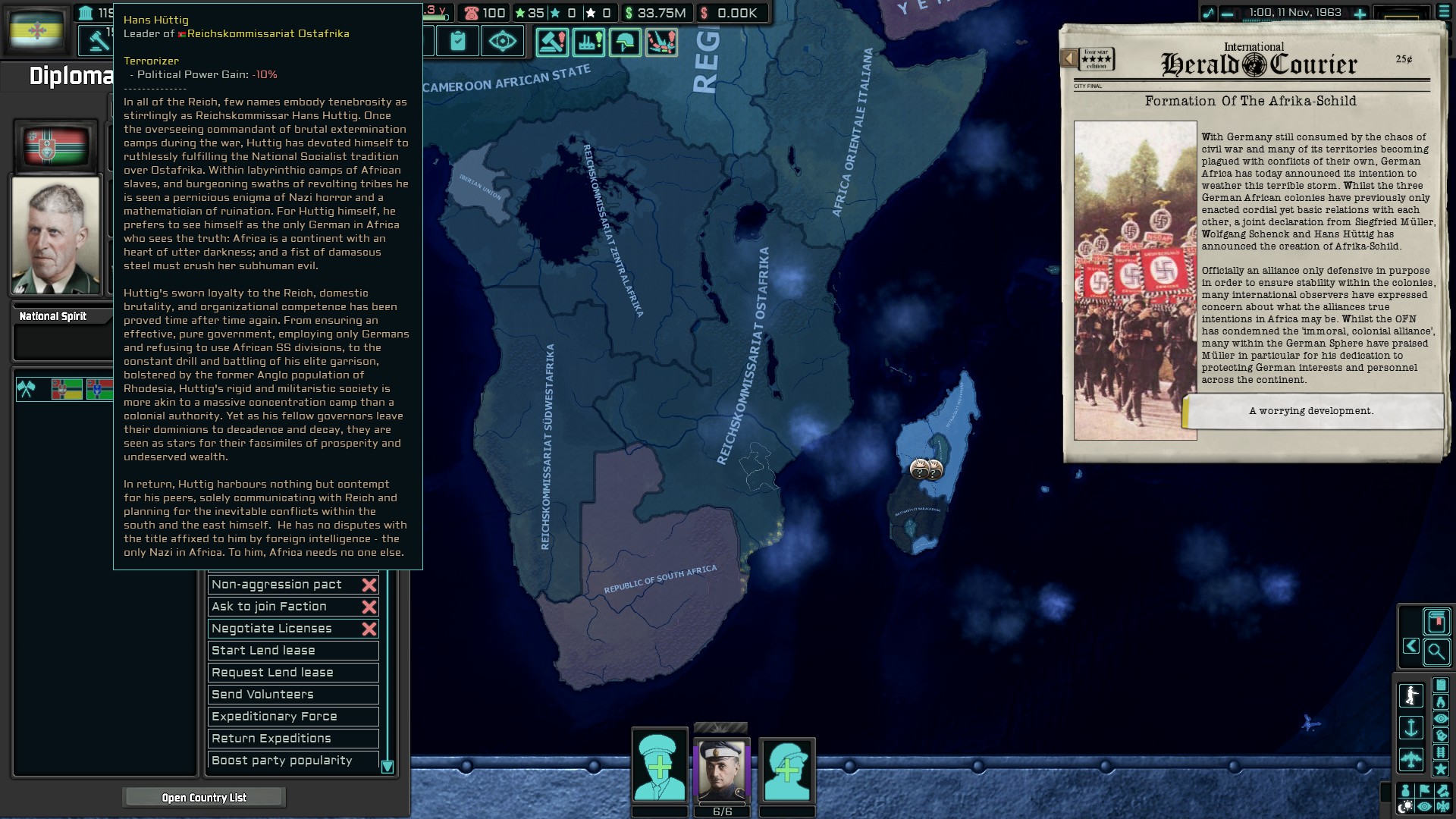 To briefly explain to the uninitiated the inner workings of the so-called “Reichskommisariat Ostafrika”, the legal name of the German colonial administration in Tanzania, Rwanda-Burundi, Zambia-Nyasaland and Mozambique, it is important to understand the fictionalised character of Hans Hüttig. In real life Hüttig was in the Schutzstaffel and oversaw the administration of several concentration camps across Germany’s conquered territories in Europe. Contemporary historians view him as somewhat of a specialist in the construction and bureaucracy side of the organised mass killings that Germany perpetrated during World War 2 and was held in high standing among his superiors, though inmates who testified against him in the post-war period considered him a cruel person. In the end Hüttig was a totally banal but professional careerist who the TNO team made into the most cartoonish villain for seemingly no good reason.

Even his apparearance in Africa in the 1960s is based on shaky foundations. Before the rise of national socialism Hüttig lived in Tanzania and he served under Paul von Lettow-Vorbeck during the East African Campaign in the First World War. He stayed in Africa until 1920 and never returned afterwards. His career in facilitating the Holocaust was undoubtedly proof of some kind of inherent villainy but not in any outstanding way, nor in a way that is particularly suited to Africa. This makes it all the more egregious that Hüttig in TNO is responsible for what is perhaps the worst crime against humanity in the history of the world when he cuts ties with Germany proper and converts the entire colonial apparatus into a giant concentration camp to “Aryanise” Africa. I can only imagine how ridiculous this might be to read without all the necessary context but even with as much understanding of the rationale behind this design decision as possible it still makes little sense.

TNO has the unfortunate tendency to opt for extreme dramatisations of historical events to depict villainous people as so evil that it loses touch with reality. In the case of Africa and Hans Hüttig there is an additional problem as well, which is that primary sources state unambiguously who would have been in charge of the German colonial administration in Africa in the event that they would have brokered peace and ended World War 2 in their favour. To prepare for the economic and administrative takeover of the former German colony of Cameroon, the organization Banane was founded and Bernhard Ruberg was entrusted with the management of the task force for Cameroon, who by December 1941 also had staffing plans for the French colonies beyond Cameroon - Equatorial Africa and British Nigeria . The organization Sisal was set up for the same purpose for East Africa and led by Philipp Bouhler from June 1942.

“Some time ago, the Sisal Organization and the Bananas Organization were set up in the colonial planning sector. These two names are camouflages for the Task Force East Africa (Sisal) and the Task Force West Africa (Bananas). Reichsleiter SS-Obergruppenführer Bouhler, who is later to become Governor General of East Africa, is planned to be the head of the Sisal organization. The head of the organization bananas is the chief of staff of Gauleiter Bohle in the AO. [Foreign organization of the NSDAP] , SS Brigade Leader Ruberg. The task forces have already started the preparatory work. - It is assumed in authoritative circles that Bouhler will not remain Governor General of East Africa, but that, after he has gained practical experience outside in the colonies, he will replace General Ritter von Epp as Colonial Minister. "

The Colonial Policy Office was training Philipp Bouhler and Bernard Ruberg for these positions for years. Ruberg himself has been working as a commercial clerk in Cameroon from 1927 to 1933. Historians writing about the NSDAP’s branches for expatriate Germans have denoted Ruberg as the head of his branch in Cameroon as well, so he was acting as the representative for Germany in west Africa for at least 6 years before he was formally appointed as the governor in waiting of a prospective retaken colony in 1940. An overwhelming amount of evidence suggests that it would have been these men that were to be put in charge in Africa.

So we come back to the question; why Hüttig? To me it seems that the TNO developers at the helm for Africa based their characterisations on (English) sources that were available to them in order to construct a narrative that is found very often even in academic circles, which is that colonialism and national socialism are somehow two sides of the same coin. Hüttig is the manifestation of an extremely exaggerated version of this, he is the so called “banality of evil” let loose on millions of innocents to prove a point. This point is, in my opinion, a fallacy based on a far too simplistic reading of both colonialism and national socialism.

The Colonial Policy Office workshopped a "perfect" colonialism where they would move small-scale industrial complexes into native villages so Africans could farm their own crops while producing consumer goods for Europe. They wanted to make sure the average African's world of experience was as small as possible so they could prevent them from organising themselves collectively and developing class consciousness. Every village would have a handful of German overseers that made sure this process ran smoothly but it was intended to be almost entirely self-managed so that the African traditional order would be preserved. The Nuremberg laws and a special "Colonial Blood Protection Act" were to be enacted that prevented most forms of interaction between Germans and Africans which would have manifested itself into a rigid system of racial segregation. National socialist Africa would be a heavily segregated, decentralised society that Germans would partake in as little as possible. Transplanting the tragedy of the Eastern Front onto Africa just makes no sense. 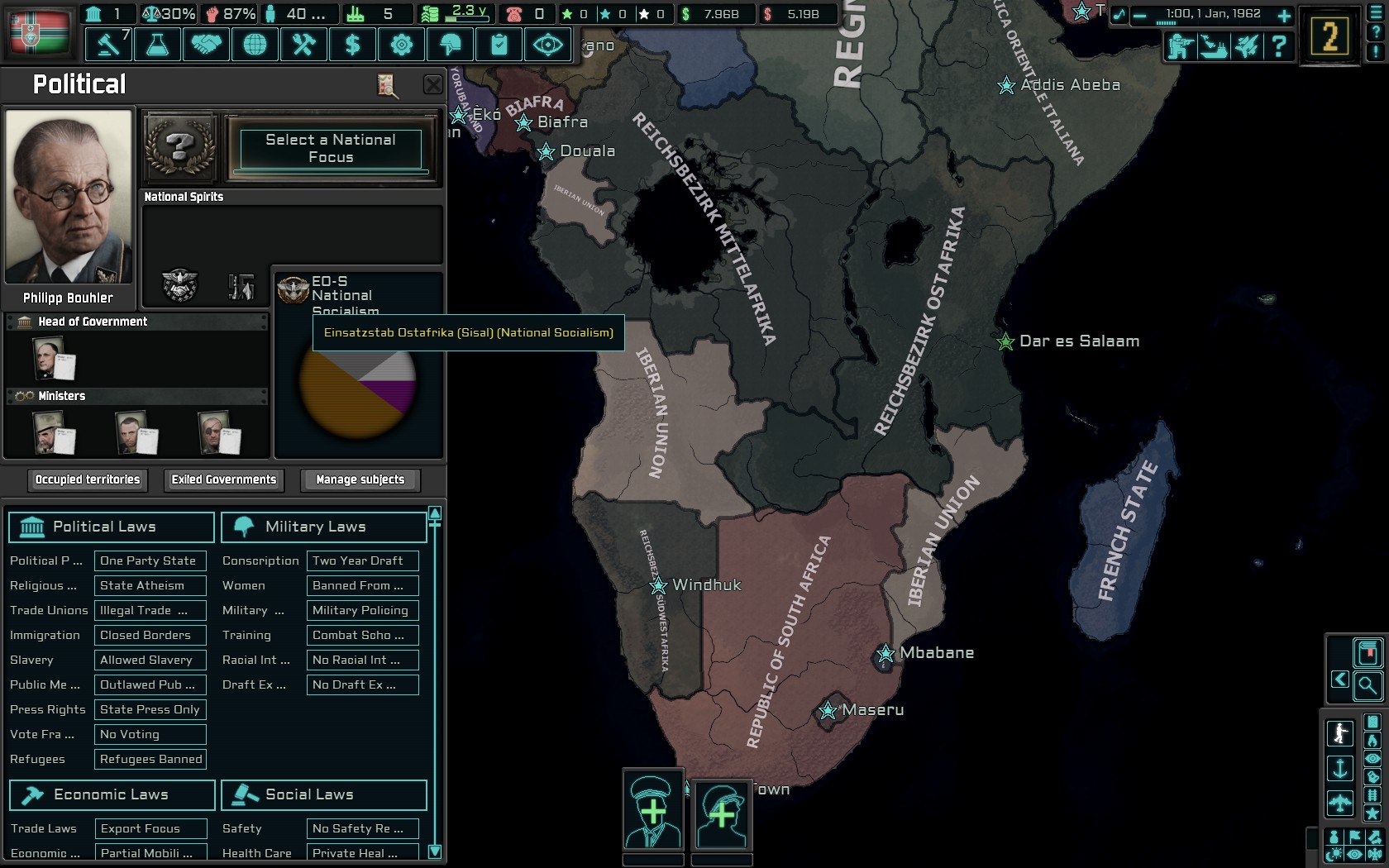