The Nazi German colonial model in a practical context; The New Order: Last Days of Europe’s Africa viewed with a historian’s lens

In the world of interactive historical simulation games a thriving community of non-academics is engaging with alternative visions of our world and presenting their ideas to a playerbase of hundreds of thousands. Due to the nature of the development of these “mods” (modifications of the base version of the game) the end product is in many cases vulnerable to accidental and purposeful misrepresentations of history. One particular case, that of The New Order: Last Days of Europe, is the focus of this thesis. The developers of TNO that were responsible the portrayal of what the real-world plans by the NSDAP Office of Colonial Policy to build a continent-spanning colonial administration for Germany following their victory in World War 2 would look like in practice from the late 1940’s up until the early 1960’s have done so with little to no attention to what primary source material dictates this system to be like. Moreover, in their attempt to inject dramatic storytelling into Africa they have made choices that can be considered gross misrepresentations of African nationalist leaders and would-be German colonialists alike.

The Cameroonian historian Alexandre Kum'a N'dumbe writes in Was wollte Hitler in Afrika? : NS-Planungen für eine faschistische Neugestaltung Afrikas a clear outline of the German plans for African colonialism and Willeke Hannah Sandler in “Colonizers Are Born, Not Made”: Creating a Colonialist Identity in Nazi Germany, 1933-1945 provides a comprehensive overview of the entire neocolonialism movement that was meant to drum up enthusiasm for Africa at home. These texts among other like them, in combination with what is still available in terms of first-hand accounts of these plans in the German archives, could provide a model for what German colonialism after WW2 would have actually been like. TNO, being a historical simulation set in an alternative history where these plans were put into practice, then serves as a framework to build this model in.

Its setting also provides a post-colonial world which explores the legacy of this system after it has collapsed that is currently left underutilised which this thesis will provide models and justification for. The world of TNO is one where imperialism and colonialism of what we would call a “liberal” nature is greatly diminished by the national socialist colonialism of Germany and the African nationalist movements that existed in the area that is now German Africa would be deeply affected by this new status quo. The New Order makes an attempt to grasp these topics, but falls short in many ways. Its interpretation of the post-colonial revolves heavily on American neocolonialism and presents no plausible alternative for a resurgent German neocolonialism, opting instead to present Germany as a global power that takes everything by military force. It is my opinion that Germany’s neocolonialism in The New Order would resemble that of France in the real world and I intend to explain this as well in this thesis.

This thesis will effectively serve as a companion piece to my version of the African content in The New Order. To realise a playable final product within the timeframe that is provided to us I have teamed up with the The Soaring Eagle development crew, whose graphic designers and writing team have offered to take my instructions in bringing the German-African model and the post-colonial world that follows to life.

The “sub-mod” that the TSE team is making focuses on reworking Germany and was by extension going to touch on Africa anyway, which is why I have been put in charge of their worldbuilding in that region. The game will convey all the ideas from my thesis to non-academics in a way which (hopefully) is more representative of the world it takes place in and gives more agency to African voices within the greater narrative of TNO. 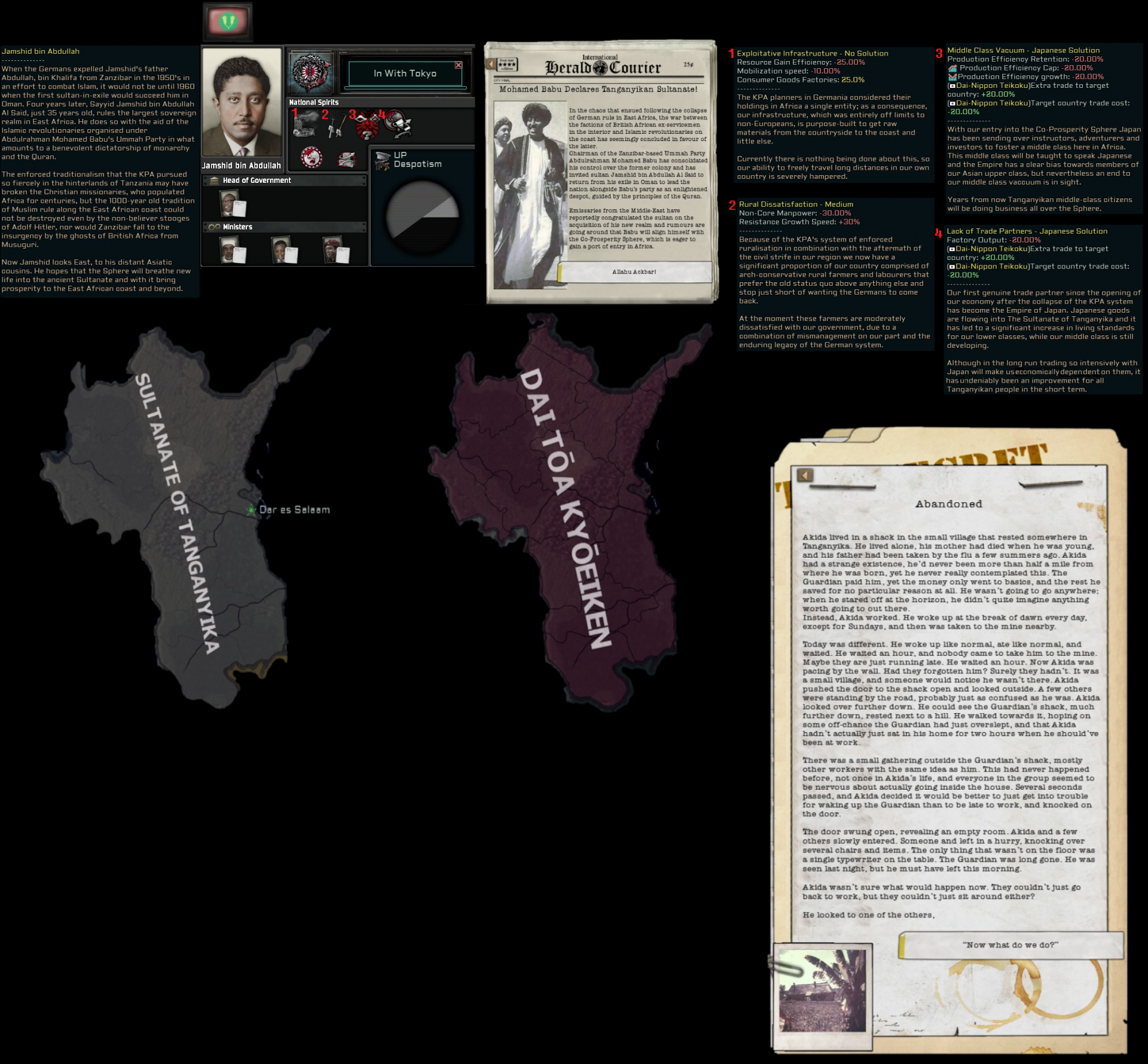 Please note that the image above is not representative of the final product and a definitive version will replace this one by the end of the week.