Considering the nature of this research, a combination of ethnographic methods looked the most appropriate option for collecting the data. According to Brymon, these allow the researcher to immerse him- or herself in a specific social setting for a certain period of time, observing and engaging in conversations with participants, undertaking interviews and collecting documents deemed relevant for the investigation (2012, 432). That is exactly what my fieldwork consisted of in Kampala, Uganda, at Akina Mama wa Afrika (AMwA). Founded in 1985 by African women in the United Kingdom, this panAfricanist, feminist leadership-development organisation aims to reinforce ‘the individual and collective leadership of African women, forming strategic partnerships, to tackle patriarchy and attain gender equality and women’s empowerment for a just and secure Africa’ (AMwA, 2020).

It is within this framework that I established relationships with young women engaged in these efforts. During the three months of internship, I supported their tasks at the organisation while gathering data through participant observation in conversations and events. In turn, they willingly contributed to this research with their experiences and views, as we will see later. Furthermore, I was provided access to the feminist and women’s movements in the country. The organisation itself constitutes one of its most active networking spaces, convening women from different backgrounds and sectors of society. To capture this diversity, I engaged with participant observation and informal conversations, which combined with a written account of events and assumptions. Similarly, I undertook and transcribed audio and/or video-recorded interviews, also on WhatsApp, that could directly capture my collaborators’ opinions and experiences. While some were semi-structured, most conversations were relatively unstructured, guided by a list of issues to be addressed. The later conversations, however, were rather aimed at supporting or challenging ideas emerging from previous encounters and observations.

Furthermore, I soon realized that I would not be able to fully understand my collaborators’ social worlds unless I incorporated the virtual space as a field of research. In my first days, I observed a persistent presence of the Internet and social media in their daily lives at the organisation. In fact, I was quickly introduced to numerous WhatsApp groups composed of activists who had participated in the African Women Leadership Institute (AWLI). My presence at Akina Mama granted me unexpected, direct access to these groups where ‘alumnae’ maintained contact with their peers after the leadership training. Scrolling down my phone screen, I started to observe significant activity with which my colleagues engaged and included references to sisterhood. Intrigued by possible meanings and practices around this term online, I decided to carry out virtual ethnography through participant observation in one of the groups. This choice was motivated by the presence of my closest collaborators, Sue and Patricia, as ‘alumnae’ in the group. I followed the same patterns employed in an offline setting: I took notes about the conversations, topics, attitudes, and language employed.

However, WhatsApp would not be the only platform used for collaborators’ connecting with each other. Twitter was everywhere. Just writing down some of my observations at the office, I realized how present this platform was in lunchtime conversations, events, personal stories, or even at the core of relationships. Sue's surprise at my barely-touched account would finally trigger my decision
to add this virtual space as a field site. Keeping my focus of analysis, I reactivated this account to engage with participant observation and start following my collaborators’ interactions on this platform. These observations were aimed at exploring the connections between their virtual and offline realities, and how they complement each other within their lives as feminists (Hine 2011, 2). While participating in both offline and online efforts, I actively observed and wrote how things evolved in both social spaces. This method allowed me to explore through my own experience, and that of my collaborators, the potential of online platforms to organise and engage with solidarity and collective action. 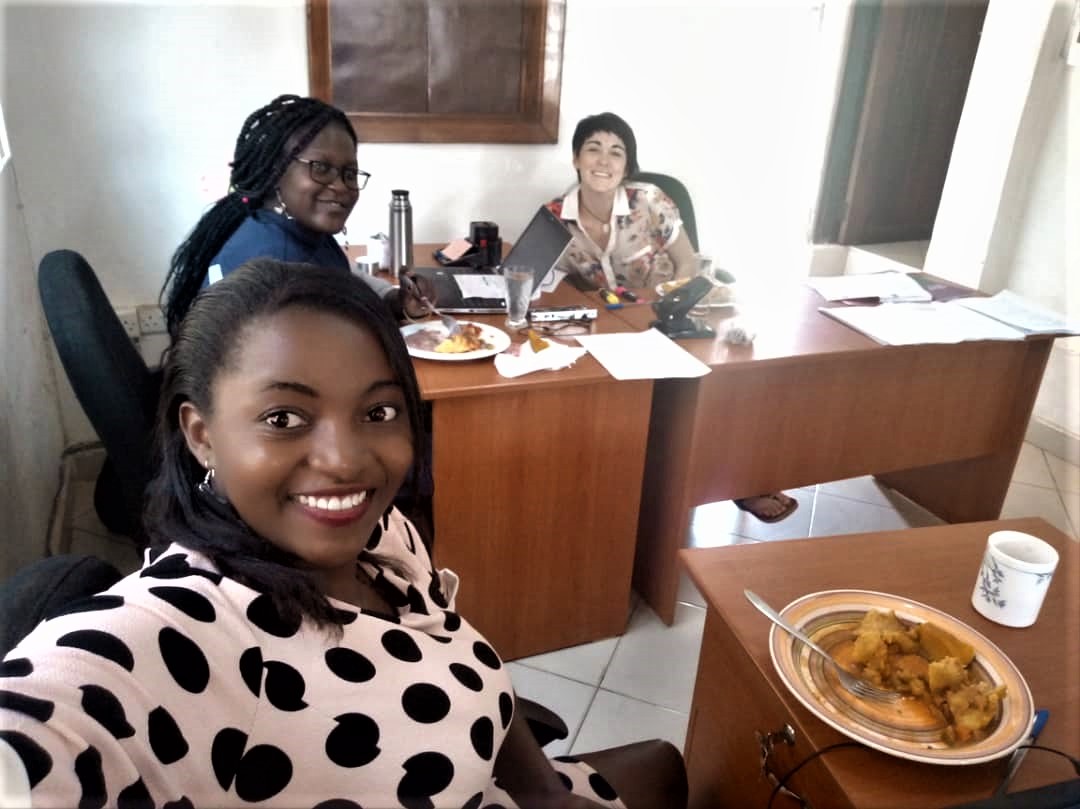 Selfie in the office at lunchtime with Rebecca Achom and Patricia Humura. 14th January 2020.

I could not give closure to this post without referring to the role of Sue in the process. From the pages of this thesis, you will observe that the experience of this collaborator is present in all empirical chapters. The choice to channel the development of the academic argument through her story comes motivated by the field experience itself.

Whether it was the physical proximity at the office, our young age, or just mere coincidence, the truth is that I felt a particular affinity developing between both of us during my stay. I was further impressed by her perseverance, which reflected an engagement with feminism thatwent beyond work-related matters. I was intrigued to know more about it. It was in the day-to-day interactions at lunchtime or at the desk in the office that I realised that she was already much more than a participant to me. The sharing of updates and thoughts about the latest events naturally combined with our tasks as interns. Furthermore, by facilitating my access to written texts, different people, and events, she soon became an unexpected research assistant. Beyond that, her presence behind the scenes went beyond practical matters. Her interests, views, and her engagement with ‘feminist sisters’ influenced progressively but unnoticeably the direction of the study. In my last days in the field, I asked myself what would have happened if someone else had been sitting next to me. Intersubjectivity, here we come again. But the truth is that the strongest realisation came to me when I was sitting at my desk back home. Trying to make sense out of the data, I noticed that she was present in one way or another in almost all instances of sisterhood under study. So, it started to seem logical
to me to navigate the story of this research through her experience. And so, new relevant insights were drawn in the process of writing.

Nevertheless, these discoveries would not have been possible without the insights provided by all the collaborators of the research, to whom I am deeply grateful. In effect, their views and experiences frame, support, and counterbalance the story at the core of this research. So much so that their contributions have inspired the elaboration of the concepts and different chapters composing this piece. It is then important to acknowledge them, and Sue in particular, as co-creators in this regard. Despite the choice of being anonymised for the purpose of this research, I will do my best to ensure that her essence, and that of all collaborators, is properly captured. All in all, I hope these reflexive examinations help the reader as much as the writer to understand the particularities underpinning the findings of this research.