What do organisations with a European component think about (“their”) mHealth in Africa? How do they think? What words do they use? And what is their message, what can be read between the lines, what can we interpret, what is the subtext and what is the conveyed meaning?

To tell this story, or at least start it and continue telling it in my thesis, I aimed to fill Africa’s geographical shape with the most used words during an interview. So to speak, this is a digital story, having its origins in “oral history” and using sound as the foundation. The inspiration to this text comes from Barber’s (2020) article “Doing digital humanities with digital storytelling”. I conducted interviews whereas the audio recording was then transcribed and put into a visual form – the wordcloud – which can now be looked at in more detail. These visuals should give an impression of their language and hence thinking, and illustrate it a bit.

The underlying questions of my future thesis are why those organisations believe that mHealth is relevant and what factors have influenced them during the time of creation and implementation of tools or proposing them as useful. When I was still doing the interviews, I asked myself, what words they used in order to describe their work to me. Are they thinking of it in terms of markets, countries or individuals? What is their perception of the space where mHealth was introduced? Who is the centre? Who is making decisions? What do they think of the digital health solution and involved stakeholders? To reach answers to these questions, to me it seemed necessary to understand how they have approached the space and people where they planned mHealth to be implemented, and the wordcloud can serve as a tool in the beginning. I created seven wordclouds, one for each interview. Terms used at least 10 times were included, whereas such words as “ahm” or their own company/organisation name (to take care of anonymity) were deleted. In this story, I will introduce you to two examples, which can be seen as the main characters.

The first one is a mobile operator association. Concepts as “markets” were very important for this association and hence mentioned quite often during the interview. This already reflects their approach, which was a business approach. They use mobiles and their solutions to do business with a “social goodness” and “for development” in markets. The European association brought itself into this market with their own initial business idea, however, they planned on leaving this market in Africa, after successful collaboration with local partners who would then continue offering the services in the longterm. 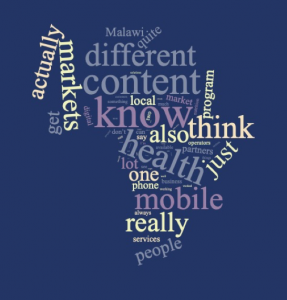 Another important word was “different”, as can be seen in the visualization. The association collaborated with several different local mobile operators and created different solutions within their development, or health, initiative, in different markets. The association apparently specified the individual solutions, depending on where they were implemented with whom and for whom.

“Content” also played a central role in their approach. The content was different, tailored to the specific market and the given circumstances. 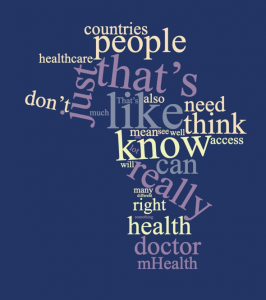 The second wordcloud is from an interview with a start-up, which aims to provide a platform where patients in Africa can talk to African medical professionals. Different didn’t have a central meaning in this one. The frequency of using the word different does not come anywhere near that of the first one. Rather, this was a solution for all. Every patient accessing the platform indeed received tailor-made advice from a health professional assigned to them. Therefore, it can be seen as that the content indeed differed, depending on the individual request for a doctor’s advice. Yet the platform, the solution, was not different, depending on the specific country, it was the same for all the countries where it was introduced. The concept of having different solutions for each of the markets was only vital for the first example. The second one, the start-up, rather spoke of countries and people. This platform is being offered in several, different, countries, they however weren’t distinguished from one another. The idea of the first example, was that the association was creating very specific solutions, for specific markets. Their belief was characterized by really localizing the content and adapting it to the cultural, regional or individual circumstances. The idea of the second example, the start-up with the advice platform, rather seems like an umbrella solution, where indeed patients get assigned to a specific health professional giving them advice, however, it is possible to receive advice from a Kenyan health professional but living in a whole other place in Africa. Here the idea is, that, though receiving “customized advice”, there is a general, African, solution for medical conditions, it doesn’t depend on where you are from. In the first one, the local context did play a crucial role. With them, for example, the people in Malawi, did not access the solution which was tailored for another market.

An often-used term and hence decisive actor in the start-up interviewee’s narrations was the “doctor”. Another important word was “access”. These words were central for their concept and vision. Let people have the opportunity to have access to a doctor “from the palm of their hand” was in their eyes something that was needed. So to speak, the people accessing the platform were speaking to someone alive, who can have a humane and active role, on the other end of the line (talking via a phone), whereas the people using the solutions from the association accessed the mobile service, the content, which is rather fixed, and not humane (talking to a phone).

Another comparison between the two examples can be seen in the respective use of “partners”. The mobile operator association did indeed rely on local partners and collaborate with them. The start-up did this to a lesser extent, since in the creation of the digital health solution, the European co-creators were mainly involved, although they have African offices (now).

Ways of analysing my research findings through this digital story telling may be continued in my future thesis, as this piece only serves as a start. I considered to present my research through a digital story after reading the mentioned article by Barber (2020).